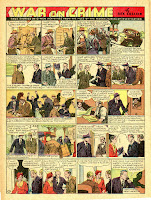 For historical detail, remember that telephone numbers used to be a combination of a word and numbers.

I like how Eddie Gentz is called the "king of the bank robbers" here. I wonder if I should have a "king of--" mobster type -- a hoodlum who has 9 HD? 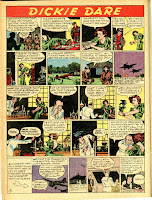 None of my research shows that microscopes could have been "priceless" in the 1930s; perhaps our villain simply puts great sentimental value to it (sentimental value does not translate into earned XP). The villain's name is Doctor Sting, continuing a string of great villain names in Dickie Dare.

This is also just a great page of storytelling, so I wanted to show it off. 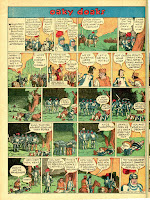 I'm not a big fan of Oaky Doaks, but here he reminds us that wandering encounter tables are the reason why even Heroes should not all go to sleep at the same time outdoors without scheduling watch duty.

It's been awhile since we've checked in on Seaweed Sam. Here, he encounters a magic item called the Vanishing Vase, which could serve as a portal to a hidden land.