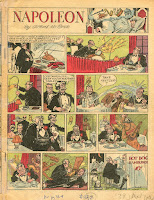 Back to Eastern's Famous Funnies!

We don't see much of Napoleon here on the blog, but this page reminds us that hot dogs and hamburgers could be purchased for just a dime in the late 1930s.

Skyroads has a history lesson for us today - this page is taking place during the little-known (today) Second Italo-Ethiopian War! 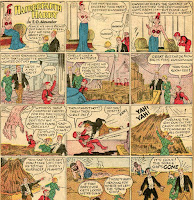 Hairbreadth Hairy continues its bizarre space epic. Here, they are terrorized by a giant named Gwuncho.  Gwuncho seems to be between 40-60' tall, making him a titan in H&H terms (statted in Supplement I: National).

What Hero doesn't want a box of dynamite? The Heroes in my Home Campaign of H&H recently acquired 12 sticks of dynamite and it will be interesting to see what they do with them. They'd best be careful, though, as dynamite has a habit of going off prematurely in the comics!

Is this another new spell? The Phantom Magician seems to be protected by a spell that turns all impaling weapons into rubber...or is this just flavor text for the Shield spell (this spell is from Supplement I)?

The Phantom Magician's Cloak of Flying is only a slight variation on the traditional Flying Carpet. It can even, apparently, carry more passengers like a flying carpet, without choking the wearer to death. 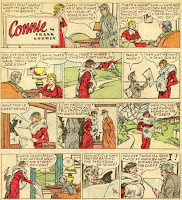 Ride a street car for just a dime, according to Connie.

According to Homer Hoopee, an average doctor can whip up a powder from an ordinary medicine cabinet that can put someone to sleep for 12 hours. More likely, though, this doctor has a level or two in the Scientist class (as found in Supplement III: Better Quality).