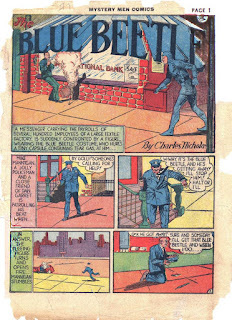 And we return to Fox's second title and a feature that had started out as a small back-up strip and now is lead feature in Mystery Men Comics.

We start with a rare example of a bad guy (the Blue Beetle impersonator) using tear gas as a weapon.

Mike Mannigan is the perfect example of the copper -- a police officer so incompetent that he stumbles when there is nothing to trip on -- he's not even close to a crack in the sidewalk.

The Blue Beetle imposter could count as a doppelganger, as they are now defined in 2nd edition rules.

Although we've seen million-dollar crimes so far in the comics, $50,000 is still a large amount in 1940 and one mobsters are willing to kill over.

I'm not sure if the Blue Beetle qualifies for the new Avenger class that is going in the AH&H Heroes Handbook, but I'm giving this ability to that class. The ability is to trigger morale saves without even being present, but via the presence of the avenger's "calling card."

Letting a bad guy get away so you can follow him back to his lair is already a cliche by this point.

I've never considered Blue Beetle to be much of a source for inspiration, but now I want a tall chest disguised as a bookcase just like that.

This may be the first and last time Blue Beetle ever carries "trick make-up" with him.

BB is teetering right on the edge of switching from the mysteryman class to the superhero class, but we're not quite there yet. BB can get two punch attacks if his opponents are unarmed, so he's not necessarily buffed with any superpowers here.

An avenger can trigger so much fear as to cause damage.

Wing Turner takes on a "costumed" foe, though one just wearing short shorts and fake horns. The Devil goes for a bigger pay-off than BB's villains had.

I've written plenty before about how vehicular combat needs to be based on complications rather than hit points. Hitting the fuel tank is a particularly good complication, one that cuts down how much longer the vehicle can move, while giving it a chance each turn of exploding.

Lava pit? How did he get a lava pit under his castle, when there's no sign of an active volcano anywhere in the vicinity of that castle? You just never know where lava will turn up in a comic book story.

(Scans courtesy of Comic Book Plus.)
Posted by Scott at 5:17 PM