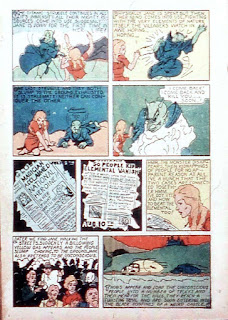 This is still Magician from Mars, and she's here in battle with the (fear) elemental (which I already statted and added to the Mobster Manual last night!). Almost too subtle to notice in panel 2, Jane seems to be tossing tiny lightning bolts at the elemental -- or are those Magic Missiles?

I'll have to add a note that fear elementals can assume gaseous form once per day.

The "Aug. 10" note, superimposed on the newspaper clipping, tells us that this story can't be taking place in the present; it has to have been the recent past (Aug. 10, 1939), or some time in the future.

Sleep gas is a standard trope of the genre, as is the tactic of pretending to be unconscious to get captured.

This time, Jane tries a much different tactic, hitting just the right musical notes to send the elemental back (likely flavor text for a Dispel Evil spell, though).

How is it that the elemental appears taller than the ceiling in panel 5? Could it be that its size is illusory...?

Just to remind you that Jane is a magic-user/superhero, here she wrecks the staircase.

This is Chuck Hardy in the Land beneath the Sea (you know, where the pressure should be crushing him to death, but...). Jerry has just been captured by something we'll soon learn is called a Quadropel Man.

Chuck, Oxan, and Jerry were outfitted like D&D adventurers, with backpacks and lanterns.

Before Chuck can find Jerry he has a random encounter with a giant pterodactyl (comic book writers never seemed to be aware how small pterodactyls were).

This might be the first time a sword has been specifically a shortsword in comics.

The Quadropel Men look a lot like green Martians. 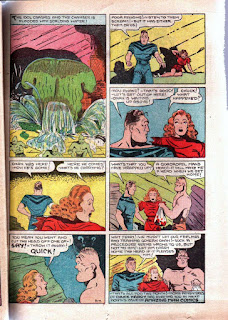 In a nice twist on the "knock the statue over on the cultists" cliche, Chuck tips the statue over into a pool of scalding water, the scalding water floods the room, and that kils the Quadropel Men/Green Martians (or at least damages enough of them that they fail a morale save en masse). I would have scalding water do 1-4 points of damage to everyone in the room (more if they were submerged in it, but the water level doesn't rise that high in the temple).

REALLY unusual for a comic book story -- not only does Oxan decapitate a foe so he can bring its head home as a trophy, but Chuck is willing to accept this as a cultural difference. In Golden Age comics, cultural differences are usually an excuse to shoot first and ask questions later.

Now we're going to move on to Mighty Man, the 12' giant. I'm not really interested in anything Mighty Man does on this page, but I'm remarkably amused by panels 3 and 4 and what I'm tempted to stat as a "jack-in-the-trunk." When hitchhiking with strangers, be extra wary if they start humming "Pop Goes the Weasel" to themselves.

It is remarkable to me, raised on comic books of the '70s and '80s with their issue-long fight scenes, how many fights are done in one hit in the '40s. Here, an ordinary person sucker punches a 12' giant in the face and takes him down in one hit.

"Little cage" has got to be a joke, since it has a 12' giant in it. Still, you've got to ask yourself, if your assistant is that dangerous that you need to keep 10' square cages set up around your fortress, maybe you should think about firing your assistant?

I'm not much interested in statting half-wolves separately from normal wolves, but the assistant (our jack-in-the-trunk from earlier) will be handy for me. I had statted assistants for the Mobster Manual what seems like ages ago, but did not have a good illustration of one to use until now.

(Scans courtesy of Comic Book Plus.)
Posted by Scott at 8:37 AM