This is still Stuart Taylor (and Dr. Hayward), going up against the real Mephisto in 14th century England. We see Mephisto using a Wall of Flame and a Fireball, but it is unclear if he is an actual magic-user or just has magical abilities that duplicate these spells.

It's hard to say who Stuart is grappling in that final panel. Did he grapple Mephisto so hard that he knocked his robes off?

I had to read this page several times to try and figure out what's going on here. My explanation is a new spell: Cloud Elevator. It's a 3rd-level version of Levitate that can transport a certain number of people at a time up or down, but only outdoors, in an elevator made of clouds.

Look, the second hatchet this issue!

Our Heroes are knighted as their reward -- which should itself be worth an XP bonus -- in addition to whatever Mephisto was worth (several thousand, easy). Perhaps leveling is triggering their time jumps, ala Quantum Leap.

Good luck guessing where "North City" is! There was a revolution, everyone seems dressed vaguely Russian (these make me think this is St. Petersburg, seat of the Russian revolution), but there are also many Genghis Khan references and a character who is an obvious Hitler stand-in. So...St. Petersburg, Berlin, or Korakorum? You decide!

The dialog is very confusing between panels 5 and 6, as if there was a missing panel. Since these stories are reprinted from Wags magazine in the UK, it is possible that some panels were deleted.

Yum Ling is half-Mongolian, I'd wager.

Hideouts & Hoodlums players better not expect too many scenarios like this, where the country's leader offers to empty its coffers and run off with them.

Here's a map, though not a very revealing one. It's interesting how the treasury is in such an isolated, easily surrounded area; I wonder how often that really happens. 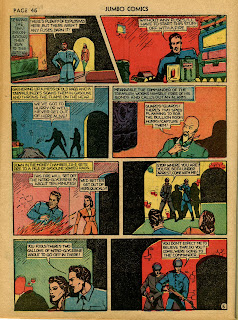 Similarly, I wonder how often that really happens that fuses aren't stored in arsenals. The "stuff" that ZX-5 is going to start a fire with look an awful lot like a toaster and a coffeepot. This is a very unusual arsenal.

This story is Spencer Steel. "Goop" was slang for an ill-mannered, rude person.

The "bunch of" thugs seems to be three in number, but that's six Hit Dice combined; Spenser should be 3rd level by now, but his companion Joe McCarthy is likely 1st.

This is unlikely to be the famous Wisconsin Senator Joseph McCarthy, as in 1940 that Joe was just an unknown circuit court judge.

(Scans courtesy of the Digital Comic Museum.)
Posted by Scott at 9:05 PM