This is still King of the South Seas, and it's Junkins who crowns him! I've written before about improvised weapons sometimes doing only half a die of damage, but without any firm guidelines as to when. I'm afraid I still don't have firm guidelines, but a lot of it has to do with weight and how wieldy it is. In this case, that looks like a heavy kettle, easily thrown by its handle, so it gets a full die of damage, but a lighter kettle or one without  a handle would not make as effective a weapon.

I included brief rules on amnesia in 2nd edition, but really don't like the old trope of needing a second blow to the head to recover (Heroes would just hit each other right away) and opted for a random duration instead.

Jungle Battles is a bizarre little one-shot, and that's saying something because the comic book landscape circa 1935-1940 is littered with bizarreness. It starts with Jay jumping into the trees to save a person from this gorilla, then Jay feels sorry for it and helps the gorilla free itself from quicksand. Then, a stegosaurus just waltzes in and no one seems enormously surprised to see it, as if Africa was full of Jurassic-era dinosaurs. 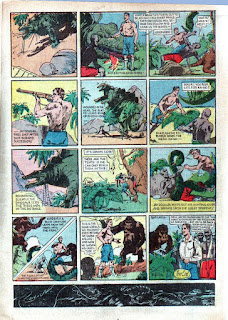 In a rare instance of a dinosaur having lots of hit points (as they do in Hideouts & Hoodlums), the stegosaurus takes a bomb to the face, is stunned, then gets back up and shrugs off a rifle shot, and then only fails a morale check when more men come running.

Then the constrictor snake encounter just seems to come out of nowhere. I can't help but wonder if this was part of a larger story, but it was chopped down to fit three pages. Missing panels could have explained a lot more of this strange continuity.

The gorilla is recruited as supporting cast simply by being rescued (remember to make those recruitment checks, even if the players don't ask for them!).

Iron Skull's adventures now take place in 1970 instead of 1950. Retcon or time jump? Either way, it's the biggest of its kind yet in the early comic book medium. Since none of the supporting cast is the same, and Iron Skull is an android and would look the same anyway, this could well be 20 years after the previous issue.

Rocket planes -- or rather, jets -- are just months away from becoming reality in February 1940. Sound detectors had been around since the 1910s. So the technology level envisioned here for 1970 has barely changed at all.

Ray guns that kill motors are the oldest mad science trope in comics, so they don't need to come from 1970.

Dead Stick Landing was a stunt for aviators in 1st edition (and could be coming back in 2nd...).

Though Iron Skull is often depicted as a superhero, there are times when he is more like the fighter class. Here is a prime example, where he seems to be unable to wreck his way out of a net. Of course, Iron Skull might be pretending to be captured so he can get Ludwig to reveal his plan to him (which does happen, on the following pages we'll skip looking at).

By the way, it's extremely hard for one person to throw a net like that.

This is Magician from Mars -- the feature, not the creature shown here. What we're looking at is a new variety of elemental. Let's call it a fear elemental. It is summoned accidentally when a musician just happens to make the right sounds in sequence. It has a paralyzing gaze, grows larger the more people fear it (size based on crowd size). His size seems to max out at 120' tall.

"No Earthly substance seems to affect it" seems to suggest that it can only be harmed by magic weapons (generally always true about elementals anyway).

Jane's ability to match the elemental for size far exceeds what the spell Enlargement is usually capable of. We might need a higher level version (Super Enlargement?) that goes up to 120' tall (or taller? They look even taller than 120' in panel 4) and increases hit dice accordingly.

Before pointing out the impracticality of fighting in what Jane is wearing, keep in mind that the elemental is wearing a loose, baggy robe he could easily be tripping over.