A used runabout (small motorboat) could be had for $75, according to Freckles and His Friends. 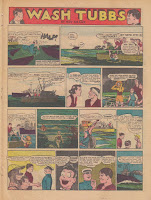 I was just recently researching for the shark entry in 2nd edition, and noticed again how many varieties of sharks don't eat people. It's a twist on the cliche deathtrap to have the sharks turn out to be nonviolent. 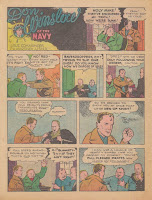 Don Winslow of the Navy is in a sticky spot -- having been discovered spying on the bad guys, there's no reason for an encounter reaction roll, as the villains' reactions should naturally be hostile. But Don is somehow able to convince them otherwise through sheer moxie. What is going on there, game mechanics-wise? Can Don have triggered an encounter reaction roll with a successful save vs. plot?

(Scans courtesy of Digital Comic Museum)
Posted by Scott at 6:55 AM