I have the rare opportunity to peruse a United Features comic book again, and this one starts with a surprisingly adventurous scenario in Abbie an' Slats! 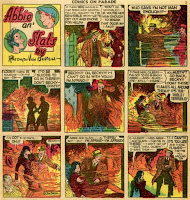 I've talked before about the difficulty of scenarios requiring navigating burning buildings. One thing that should never be difficult, though, is for a woman to get a man to do something by calling his manhood into question. That doesn't even require an encounter reaction check. 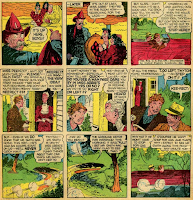 The previous page featured Abbie and this page has Slats on it. This page reminds me of the importance of roleplaying well-rounded characters for the Heroes to interact with. Personality quirks, like being a busybody, could later work out to the Heroes' advantage. 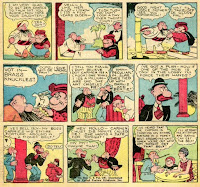 Brass knuckles are very popular weapons in Hideouts & Hoodlums -- but this, surprisingly, is the first time I've seen them in the comics (and this is The Captain and the Kids). 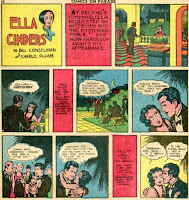 Speaking of starting equipment, Ella Cinders reminds me about smelling salts. These are, apparently, invaluable for reviving fainting women, but fainting isn't in the game mechanics so we're not concerned with that. Normal smelling salts cannot revive a person unconscious from injuries. Could a trophy item version of smelling salts do that? But then, a normal, non-trophy first aid kit can already do that. So what do we need smelling salts for again...?

You probably wouldn't be able to guess from looking at it, but that's a grizzly bear menacing the half-pints in Broncho Bill. It does present me with some interesting ideas, though...should there be a morale save required whenever meeting something with x number of Hit Dice more than you have? Should morale, in at least this instance, apply to Heroes? And should being petrified with fright be a possible morale failure result? 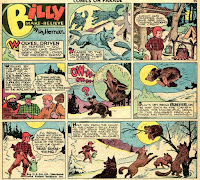 Billy Make-Believe features a pack of wolves, but correctly points out that wolves do not attack unless hungry.

(Scans courtesy of Comic Books Plus)