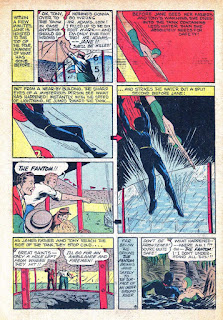 We rejoin the Fantom of the Fair as he's chillin', just watching a circus act, when ...well, let's think about what's happening here.

The Fantom somehow senses that something is amiss, but we don't know how. Perhaps he was using Super-Hearing for some reason and overheard the man at the tank, far below, over the din of the crowd. Perhaps the Fantom just has a really good sense of volume and figured out that the water was low from looking at it. Or maybe he was using some kind of heretofore unknown Detect Danger power/spell (or would Find Traps duplicate that?).

Then The Fantom defies physics by leaping after Jane, and less aerodynamically than Jane (and with the drag of the cape no less), and still manages to hit the water before her. Some new power called Fall Faster? 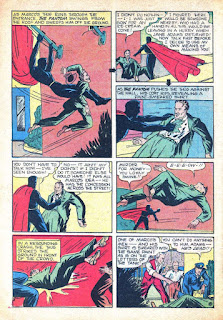 And then there's The Fantom throwing the guy and him landing dead. In Hideouts & Hoodlums you cannot kill in one hit, no matter how much damage it does. I could change that rule -- say, adding an amendment where if you do 10 or 20 points of damage more than what would drop you to zero hit points, then it can be an instant kill, but this is a throw attack that shouldn't possibly do that much damage. Unless The Fantom is using some new power called Super-Throw (with increased grappling damage), or Killing Blow (that gets around the not killed at "zero hp" rule).

This page I include for trivia. From Jane's comments at the end, coupled with the clear outline of a face on The Fantom -- I'm beginning to suspect that The Fantom isn't wearing a mask at all. Rather, his face is always masked in shadow, thanks to magic, and we're just seeing him in silhouette.

A prototype for Marvel Comics' High Evolutionary. More proof that Carl Burgos invented the Silver Age of Marvel Comics back in 1939...?

Now I'm trying to decide if rocket cars needs to be a trophy item. A commonplace rocket car might seem futuristic, but a rocket car held the land speed record (345 MPH) as of 1938. Maybe the Thunderbolt (#7 on this list) will get a stat.

I think I've just solved my problem of how to justify keeping the acetylene torch on the trophy list. A "blue ray" acetylene torch makes it seem more exotic, and could maybe justify boosting the damage it causes a little.

A note to myself that a large transport plane can be a trophy item. A large transport plane has several benefits for a group of Heroes -- it can easily transport them all in one trip, as well as storing all the supplies they might need on adventures (you can see how the interior side of this plane is set up like an armory).

This is Don Dixon. Don't drink was apparently drugged with a Potion of Madness. It makes him gibber and sound like an egomaniac.  Hmm...did someone slip this to Donald Trump?

Oh, Speed Centaur, you goofy feature! I guess Speed cut off his arms in order to fit his torso into that fake horse head? The lesson here is that you don't have to think too hard about disguise for it to work in H&H.

(Scans courtesy of Comic Book Plus)
Posted by Scott at 9:38 AM