Sneaky Dan Dunn imparts some good playing tips here on how to...be sneaky!  If your Heroes need to arrange a secret rendezvous, it's best to use a public payphone, meet via taxi at a random location, take a roundabout trip via taxi, and then walk the rest of the way, all to watch for tails.  Remember, the longer the trip, the more rolls you should get for spotting someone shadowing you (the same chance as finding secret doors).

In this age of miniaturization, it's important to keep in mind how BIG a mad science machine should be in Hideouts & Hoodlums.  Towering structures, operated by levers, huge pistons, gears, noisy, mechanical contrivances -- these are the hallmarks of comic book science.

If your Heroes stumbled into a vault filled with barrels of diamonds, what would they do?  The fastest way to level up in H&H is by finding valuable treasure, but if the Heroes keep trying to sell all their found treasure to the same merchants in the same area, they'll soon find they've caused significant inflation, turning their home base into a "boom town", perhaps as bad as back during the Gold Rush. 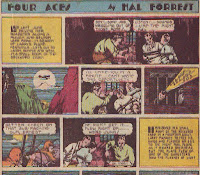 Superheroes can wreck their way out of binding ropes, but should other Heroes be able to wriggle themselves free?  Perhaps. As the Editor, I would have to rule on how expert the tyer was with rope use, if the job had been hasty enough to have allowed for some slack, etc. I would then decide if I would allow a single attempt at a save vs. plot to determine if the Hero can wriggle free. 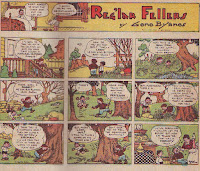 Should hornet stings cause points of damage? Unless there was something unusual about the hornets (like giant hornets!), I would say no, let's not put half-pint Heroes in that much danger. Instead, I would require a save vs. science, per sting, or the victim is too miserable from the pain to do anything for a full turn.


(Scans courtesy of Digital Comic Museum)
Posted by Scott at 10:56 AM