Skyroads was an aviator strip that enjoyed genre mash-ups and, here, is tackling the spy genre. The plot hook SCM here is the woman with the refreshingly unfeminine name Dagmar Collingway. Either that's her code name, or her parents were really bitter about having a daughter.

Speaking of spy stuff, I'm tempted by this to, if I ever revisit the Spy class again, to give them a chance to know passwords -- a small percentage chance that goes up each level. 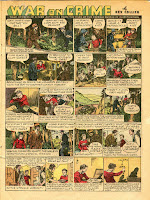 Hidden all the way down in the last panel of this page of War on Crime is a great idea that I've never seen tried before in 33 years of gaming. We all think to look for footprints on dusty floors, but why don't we think about the dust on the walls? There's the chance to leave notes written in dust on the walls, as seen here, plus looking for fingerprints. 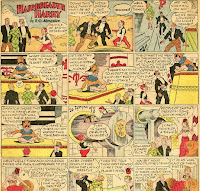 Continuing Hairbreadth Harry's outer space adventure, we here see the trope of regressive culture in a technologically advanced setting. This way, the author/Editor can have his cake and eat it too -- hi-tech trophies like floating elevators and pneumatic cars lying around, but the people around them backwards and superstitious, and less challenging to overcome. 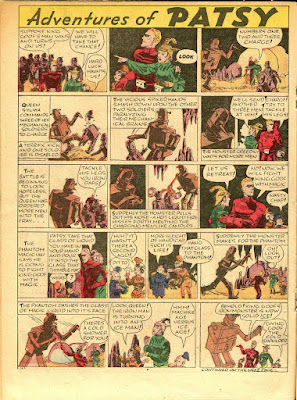 It's important to remember that robots in the Golden Age are purely mechanical, not electronic. You can't overload its circuits with electricity, but you can thump it on the head and knock some cogs and gears out of whack.

This huge robot is actually pretty fearsome, and a slight upgrade on the two huge robots statted in Book II: Mobsters & Trophies (the bronze and silver robots). Note the impaling spikes for hands, and the way it sprays fire out of its nose!

The Phantom Magician's new spell should be called Cold Shower. It causes a liquid to become so cold that, if spilled on a single target (living or non-living), that target will have to save vs. magic or become frozen and rendered brittle. The liquid and any container holding it are not frozen. The liquid can be splashed up to 10 ft. away. I suspect this would have to be a 3rd level spell. 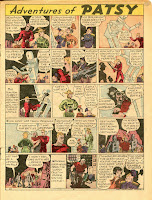 Well before Bozo the Robot would debut in the comic books, this huge robot turns out to be hollow, with space for a live pilot!  In The Trophy Case v. 1 no. 2 was the only time I allowed for a robot with a living pilot (the vampiric robots of Mercury), but I think I should allow for this possibility from Earth robots too in the next edition. 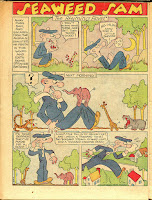 Magical growth berries, just sitting on a bush waiting to be eaten? Sure, Seaweed Sam!  Remember, if you're stuck for what should happen next, just insert something random and crazy into the game and watch what happens next. You can always go back in and try to rationalize it later (or better yet, let your players come up with rationales for you!).