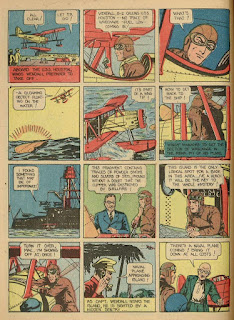 This is Wings Wendall, and I can point out a few salient features from this page. One: more proof that seaplanes are incredibly common!  Two: the Pacific Ocean is not so big that you can't just fly around randomly and spot a bit of flotsam floating beneath you that will serve as the clue you need. Or, in other words, always leave your players a chance of finding something they need, even if you reduce their chance to just 1%. Three: fragments of powder, smoke, and slivers of steel are good clues of shellfire. Four: for the Editor, it's a good idea to have a sentry outside your hideout, concealed under camouflaged cover. And, with the benefit of modern technology, he can simply phone his boss inside and tell him who's coming! 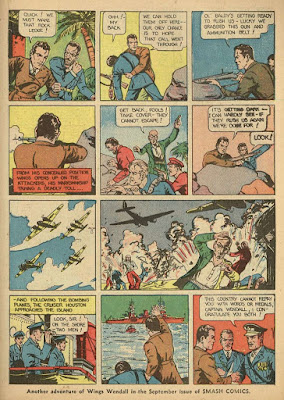 Here, Wings and the villain only called "baldy" are engaged in tactics of opposing attack modifiers. Wings gains an early advantage, hiding behind hard cover and sniping mobsters as they approach him. But Baldy is willing to wait him out until dark, when everyone will have the same penalty to be hit as being behind hard cover -- or twice as good if it's pitch black out!

Now, Wings' modifiers are cumulative, so he'll be at -4 to be hit; -2 for the cover and -2 for being in dim light, while everyone else just gets the dim light bonus. But it's not the dim light modifier, per se, that has Wings worried, it's that with his lower chance to hit some mobsters might get past him, or outflank him, and he'd lose his cover bonus.

Also, it's worth pointing out that, personally, I think summoning the Air Corps and have them bomb the heck out of the bad guys is a cheating way to win a Hideouts & Hoodlums scenario.

Archie O'Toole has fun, thanks to a Potion of Invisibility. This page also sets a precedent for ingesting food soaked in hi-tech/magic potions to have the same effect as drinking the potion directly.

The Invisible Hood debuts. He's the third Mysteryman with a gas gun. Other than that, he does a lot of sneaking around here, relying on surprise rolls. 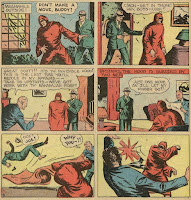 Your Hero is seldom going to be this lucky -- the Invisible Hood is captured and held prisoner, but underestimated (probably because his costume is a hooded pajama suit) to the extent where one of his two guards stops watching him and reads the paper! Your Editor is probably going to give you a break like that only once in a campaign, so enjoy it while you can! 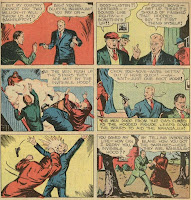 The Invisible Hood's gas gun can down four hoodlums at once (if they all miss their saves vs. science).

This is Captain Cook of Scotland Yard. I've learned from Cook that you can pimp out your (circa 1939) planes with: wireless radios, parachutes (obviously), blinding headlights, train whistles, an engine silencer, and ...an "anti-aircraft detector"? I guess from the context that it detects aircraft, and not anti-aircraft weapons. It's likely they mean Radar (a term which wasn't coined until 1940). Radar stations were not miniaturized enough to fit in a plane circa 1939, so they're referring to Scotland Yard men working the Radar from the ground. 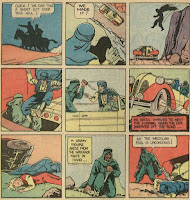 This is Abdul the Arab. Jumping down into a moving vehicle as it speeds past you...I've never tried it, but it seems like that would be difficult. I guess it would be an attack roll, but the Armor Class would have to be guessed by the Editor based on how fast the car is going. Perhaps -1 to AC per 10 MPH? (a simplified version of the vehicular combat rules in Book III).

I've previously talked about how little damage car crashes seem to do in comic books, which makes it seem odd that Abdul gets knocked out here. But he is still a 1st-level Fighter, so it doesn't take much damage to knock him out yet.

The girl is "stunned". In this case, that means she's out for the length of a sandstorm, so...1-6 exploration turns?

(Scans courtesy of Comic Book Plus)
Posted by Scott at 9:53 AM