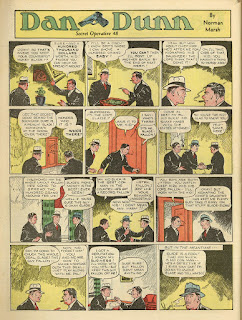 We haven't checked in on Dan Dunn in awhile. Here, I'm interested in the double protection of having a secret room, behind a secret door, and a second concealed door behind a painting in the secret room. But can we distinguish between secret and concealed doors here? We don't actually see the first secret door behind the bookcase; it's just described to us. If the bookcase is only blocking a normal door, then I would call that a concealed door. But if it looked like blank wall behind the bookcase until you pulled a lever disguised to look like a book on the shelf, causing it to slide open, then you have a secret door.

Slade missed his save vs. plot to see through Dan's act, but Fallon made his. It's worth pointing out that a disguise doesn't have to be a fake mustache or stage make-up; it can be trying to pass yourself off as someone else. 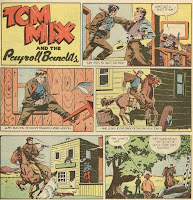 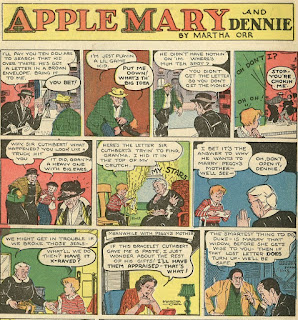 Only a hoodlum who's never read Treasure Island would skip searching a crutch.

But I'm more interested here in Peggy's Mother's concern about her jewelry being all fakes. Granted, this is a non-Hero character, but if it was a Hero, how would I handle this? A successful appraisal check tells her they're fake, but a failed roll only tells her she doesn't know for sure yet.

In Hideouts & Hoodlums I don't tell you who should make the dice rolls, leaving that up to each Editor to decide. Often, I like to let players make their own encounter reaction rolls. I normally do let them make their own skill checks -- but I can see situations, like appraisal, where a secret check by the Editor might make more sense. Then the players have to react to what the Editor tells them, instead of what they know from the dice roll. 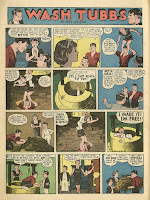 The nice thing about this escape plan is that there's no time crunch involved. If the cistern had been filling up with water, that would be another thing, but because the three of them can try the human pyramid trick as many times as they want, there's no reason not to just wave game mechanics, say it works, and reward Easy's player for his good idea. 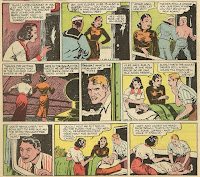 From Myra North, Special Nurse, we learn that artificial respiration was much different in the 1930s! It makes you wonder how first aid ever worked back then. No wonder it doesn't give you immediate hit points back in H&H! 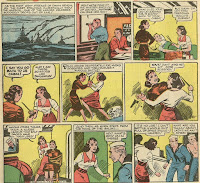 I just had to share this because it's pretty cool. Myra North must have at least one level in Fighter. Here she takes on a spy armed with a gun, using only a pair of scissors, and still wins! 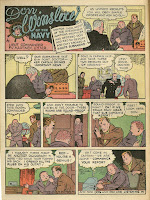 Sound-proof doors in hideouts is something to consider. It would waste a lot of players' hear noise rolls during a hideout-clearing expedition. On the other hand, it would also keep mobsters from being able to hear combat in their neighbors' rooms and lend aid.