Something I've struggled with for Hideouts & Hoodlums 2nd edition is whether or not the game needs both dual classed and multi-classed Heroes (the former gain xp in one class at a time, the latter divide their xp between multiple classes at once). Can there be a better case for including multi-classing than the Fantom? Look at that agility (often considered a facet of Dexterity, the prime requisite for the Mysterymen class), look at the flair of his stunt, and look at his style of intimidation -- all hallmarks of the Mysteryman class. But what's this? He can also easily snap a rifle in half? Wrecking things? Is he a Mysteryman/Superhero?

It's not clear how The Fantom passes through the ground. On this page, it appears he can become intangible. On the next page, it says he went through a trapdoor that we never saw him open. Maybe it's some sort of revolving trap door that you just have to land on a certain way to make rotate...

If it wasn't clear before this page, The Fantom of the Fair (he's at the World's Fair, get it?) is a modern version of The Phantom of the Opera. But what's this? Now he's casting a spell? A Forget spell? So he's a multi-classed Magic-User/Mysteryman/Superhero. And he can't be dual classed because he hasn't had other adventures to switch classes on -- this is his first adventure!

Okay, I've got to admit this is pretty cool. The Fantom punches through an exterior wall (which means he's wrecking at 2nd level, at least), puts the guy on the other side in a headlock (at -4 to hit, because he can't see through the wall), and pins the guy to the other side of the wall.

A player in my current online H&H campaign has a background like this -- mysterious group funds his adventures.I haven't made any real use of them yet, but I like how The Inner Circle is composed of talented supporting cast who could all be useful to the Hero.

In my campaign, the group is based out of Los Angeles instead of Glasgow, and is strictly limited to U.S. interests instead of global missions. I could see a campaign where Heroes hop from organization to organization like this, moving up to a bigger organization as they go up in level.

Hong Kong sounds like a pretty exciting locale to base a H&H campaign around. The war zone there and the bombing campaign are seldom touched on in Western accounts of WWII. And "fish pirates" -- what's not to love about that evocative term?

And this is really smart playing, scouting out the base (or hideout) at night, then making plans, and even agreeing not to harm a particular class of mobster (natives) they might encounter. If they make any mistake, it's leaving their fake fishing boat too close to the hideout (though maybe they were going for a "hide in plain sight" strategy). 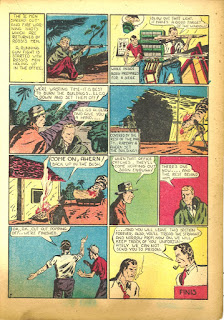 Now, meta-gaming wise, this is actually poor playing because they may not get any experience points for defeating the mobsters, and they'll loose any xp from claiming trophies from the hideout since they burned the buildings down before looting them. With this style of play, though, the Editor serves the players better by awarding one big xp award for an accomplished mission, rather than for the details of the mission.

I know this is just gag filler, but...how sad is this? We're just 23 years from 2039 now, and not only do we have no manned presence on any other planets, but we're nowhere near building a spaceship able to travel 50,000 MPH. The fastest ever is Voyager 1, which is currently going 38,000 MPH.