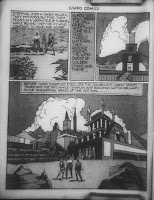 I don't always have perfect digital copies of old comic books to look at, and Jumbo Comics is a perfect example of that. So far, I've had to settle for looking at the entire series in black and white. Normally, that doesn't trouble me greatly, but I do wish I could see "The Golden City" here in color, and determine how much of that "golden" is literal description and how much of it is hyperbole. 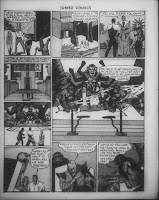 We get treated to some great visuals of this hidden land, most especially the courtyard of a palace. We see a dais, two trees growing up behind a throne carved to look like a many-armed demon. A man on the throne, flanked by trained apes. Looks to be quite an encounter! 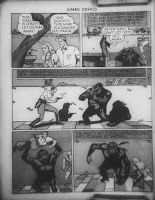 A rare instance of a gun jam in comics.

The ape is using its "rend" special attack on Bob. Bob doesn't seem to be appreciating it. 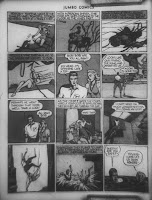 The ape takes lethal damage from a fall. Bob was knocked out after two turns of fighting an ape (really, the ape just wailing on him mercilessly), but here is already recovered just a turn or two later.

The text doesn't match up with the pictures when Sheena and Bob fall into the trap. The caption says they are entering the courtyard, but they just fought the apes in the courtyard. It must mean "As they enter the palace".

The ol' trap door leading to an underground river trap. Note that Bob tries and falls to save them by holding onto the trap door, suggesting that the Editor gave them a saving throw to try and save themselves. 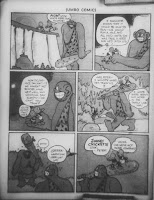 Peter Pupp runs into a 20' tall moon giant. They look and act like hill giants, but they're as big as cloud giants. 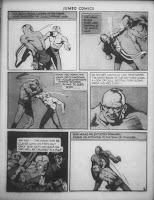 The Hawk fights Gor, a black "giant". Gor is able to pay "no attention to the rain of punches", probably because he's statted as a thug, and has a thug's Armor Class, despite wearing no actual armor. The Hawk keeps swinging, but isn't actually hitting well enough to do damage yet. 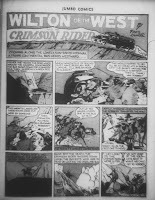 Wilton of the West is teamed up with the Crimson Rider with this issue, the Crimson Rider being a cowboy, but of the Mysteryman class. My evidence of this? Mysterymen trigger morale saves as soon as they show up, while other classes have to do something first. 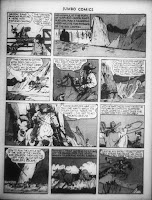 The Crimson Rider isn't concerned about making a 20' leap on horseback, and probably for good reason. The world record for a jumping horse leap is 28', so I'd probably give the Crimson Rider a ...4 in 6 chance of making the jump successfully?