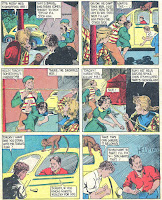 It's 1939, so when you read a title called "Funny Pages" there's sure to be a scene of a girl strangling a man with a lasso!

I'm disinclined from giving lassos special abilities, especially ones that circumvent the hit point mechanic via strangulation. Lassos will probably just do 1-4 points of damage in 2nd ed., and if that's enough damage to render someone unconscious, then maybe it went around the neck after all.

This is an awfully goofy page of filler, but I think it has a strong moral for Hideouts & Hoodlums players:  don't get too goofy because you think your Hero can soak up any damage he takes; the Editor always has a way to kill off your Hero if you start playing him stupid. 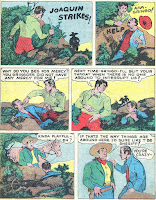 And maybe there's a lesson for players in this page too. If your Hero uses ruthless tactics, the Editor is going to be more inclined to use ruthless tactics back at you.

We have a true Magic-User in this gag filler story. Is this a new spell called Spirit Money, or a clever use of Phantasmal Force? Because the money disappears after Keeno stops concentrating, it's likely Phantasmal Force.

Should riot cars be trophy items? It seems like this car has a better than average change of wrecking through doors (as if a 1st level Superhero?).

The new riot car is also the "fastest thing on four wheels" -- that might be guilty of hyperbole.

More importantly, we may have learned that The Arrow is from Newark, New Jersey! 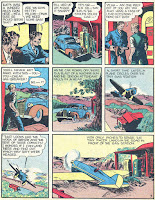 Gas station attendants have nerves of steel -- they should have fantastic morale saves! 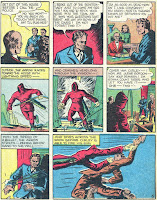 Is lightning speed narrative hyperbole, or the Outrun Train power?

Breaking through a window should not require a wrecking things roll.

The Arrow either shoots the arrow during a surprise turn and grapples first because he won initiative on the first normal turn of combat, or is using Multi-Attack to get multiple attacks in the same turn -- and then can apparently split them between different attack forms, which the power description does not specify about.