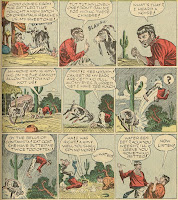 I don't agree with Hairbreadth Harry that pulling a snake off of someone would spin them like a top, that spinning like a top would necessarily hold a tiger spellbound (though I suppose you never really know with cats, maybe every turn spent around a cat should result in a random encounter reaction check?), or that a tiger wouldn't notice its own tail being tied. That all said -- it does seem like a sound strategy to pick up an animal and throw it at your main opponent. The animal, enraged, is likely to attack whoever it lands closest to.

Dickie Dare doesn't fail to provide -- we get a partial map of a hideout, ideas for treasure to place in a hideout, and the idea of having the hideout unoccupied, giving the Heroes a limited time to loot before the mobsters show up.

Never miss a chance to split up the party!  If asked which way they jump, during a cave-in, players may be tempted to use player knowledge and make sure they all jump the same way. A better way to handle this might be to ask the players to write down on slips of paper which direction they jump.

An unusually effective page of Oaky Doaks. This would be a good set-up for a haunted castle...

This is from the Life's Like That gag filler, but I found it quite amusing.