Forgive the graininess and (this pun) quality, but I wanted to share at least a portion of this page of Joe Palooka so I could share this idea of a "sandbox" setting for Hideouts & Hoodlums.  For those not up on all their gaming terminology, a "sandbox" setting is an open setting prepared in advance for a campaign. The adventures are keyed to set locations or set events and are only encountered if the players choose to go that way. The whole sandbox is open to play.

Now, I am on record as hating the term "sandbox", but the idea itself still intrigues me. What would a sandbox setting for H&H be like?  Well, I imagine it could be a city-based campaign -- sort of a modern-day version of Citystate of the Invincible Overlord, with a high chance of certain types of encounters on certain streets.  So, if you want down this one street like Joe Palooka did, it would be a good place for running into wandering hoodlums. 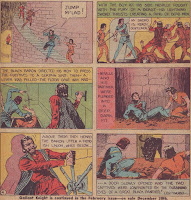 The Gallant Knight fell in a pit trap with a slight twist, a secret door in the side that lets a "great" black panther into the pit. Great is a superlative that doesn't have any game mechanic value in H&H, but perhaps it could be considered a large panther (5 HD?).

Code breakers in real life require a lot of intelligence and skill. In comic books, as this installment of The Clock Strikes reminds us, the only ability you may need is being good at unscrambling words. Of course, this is a lot easier a code to spring on your players without making them hate you too much.

I haven't got to post a map in awhile. While Low Lake seems an intriguingly named local (why is it so low?), the real mystery seems to be why so many roads converge in such a lonely stretch of woods. 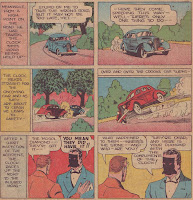 I would have to say, if I were the Editor running this game, that the Clock's player is being awfully reckless and doesn't care if his Hero lives or dies. While I should probably have a good long talk with him about why he's so unhappy with the campaign after this session, in this instance I would forget about trying to computate how many dice of damage to roll based on the speed of the cars, minus the amount of dice the cars would absorb, and just have all occupants save vs. science to jump out in time or die.

In this installment of Espionage is the debut of Black X's manservant, Batu. As I discussed in Supplement IV: Captains, Magicians, and Incredible Men, Batu is a good candidate for having psionics, and definitely the first non-Magic-User psionic in comic books.

I've shown pit traps before that combine with flooding traps, but they usually imply some complex plumbing going on behind the scenes to flood the pit. Here we see the au natural option of dumping your foes into a subterranean cavern that floods with tide water. Of course, then the time of day makes a big difference in how dangerous this trap is.

I'll spare you the whole story, as it's not very good, but the set-up here is the old chestnut of the voice in the statue talking to the gullible natives and making them give over their treasure. The wrinkle here is that there's actually a bit of a hideout here -- a concealed cave that connects to a cabin, with a tunnel that leads under the cabin and back to the big hollow totem, which has a secret door entrance in it.