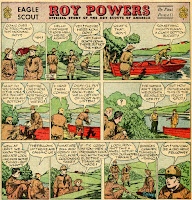 Here's a fun item to throw into a hideout -- a bucket with a glass bottom. What's it for? For seeing underwater, of course, as any eagle scout can apparently tell you. 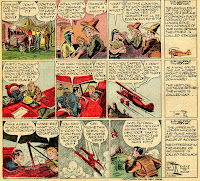 This is from Skyroads, and I've done this too. Your players want to know exactly how many gold coins are in that sack, but you cut corners preparing for the game and only worked out what the dollar value of the whole contents are. Who has time to go check the price of gold in 1940, divide the total dollar sum by it, and get a number of coins? So you tell them, "it's a sack of 50,000 bucks in gold" and, if they ask for details, you add "don't worry about it..." 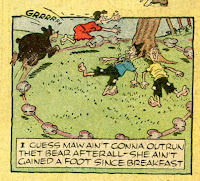 From the gag filler Life's Like That, here's something I thought was funny. 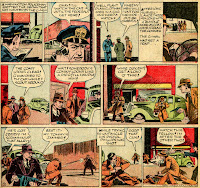 This is from War on Crime.  It seems that hoodlums always have a chance of identifying "dicks" -- or good guys in general, on sight. A 1 in 6 chance, perhaps?

I am not a fan of Jitter, a pretty humorless gag strip, but this page has some mini-history lessons for us -- specifically what a street-cleaning wagon looked like in the 1930s, and the fact that gas stations also had water hoses. 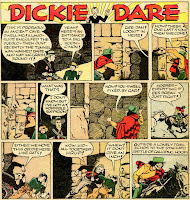 It's rare that the entire hideout turns out to be one big trap, but in this case the entrance is rigged so that, if someone pulls out some of the support stones, the entrance slides shut and traps you inside. 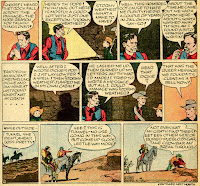 There's two interesting things to point out from this page of Dickie Dare.  One is the clue, mysterious words written on a piece of paper, meaningless without context, which turns out to be the last name of a villain to be met later (and will be recognized then as foreshadowing).  Two -- and this has come up before -- is that every hideout should have more than one entrance, even if you need a crowbar to break into the secondary entrance.

This is from The Adventures of Patsy.  Animals won't cross a line of fire unless they make a morale save. This might apply to ordinary hoodlums as well, since the line of fire could do 1-6 points of damage to the crosser.

Seaweed Sam is back because of the iron robot he encounters this month. It's far stronger than the version found in Book II: Mobsters & Trophies, though maybe it could use an upgrade -- give it the Raise Elephant power?