That horrible Rico is using Jean as a living shield! Or is he? Jean is, interestingly, not in a direct line of fire between Rico and any of the shooters, yet they are hesitant to shoot at Rico. That's because of how dangerous it is to shoot into melee in Hideouts & Hoodlums; on a miss, there's always a chance of hitting a random other person. 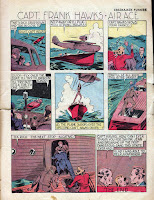 If there's a ten to one shot of dropping from a fast-moving plane onto a fast-moving boat, then Hawks needs a 19 or 20 on his attack roll. 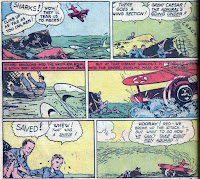 This is from Don Winslow. There's some implied violence here that's quite surprising -- the plane's propeller is being used to attack the sharks in the water. I guess this could be resolved as a simple attack, treating the plane as a weapon. The propeller might do...2-16 points of damage?

I don't think these are appropriate starting equipment items, but they could make for good low-powered trophies -- a flare gun and a collapsible rubber life raft (complete with bottle of pressured carbon dioxide). 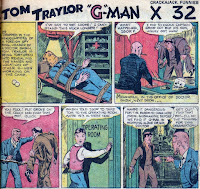 I'm not sure how this torture device works. A light beam in the eyes apparently forces him to make a save vs. plot every 10-minute turn or tell a villain everything he wants to hear.