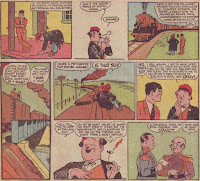 I never thought I'd be starting a post here with a Captain Easy image quite like this one, but appropriate language is an issue worth bringing up, I think. There's a word right smack dab in the middle of these nine panels that, for much of comic book history, you wouldn't have seen in print. Now, this is clearly the exception -- I've had 231 posts before this one, reporting on comics that contained nothing this crude/colorful in them. I guess the point here is that, comic book purists don't have to kick that one player who lets slip the occasional crude/colorful word out of their gaming group after all. 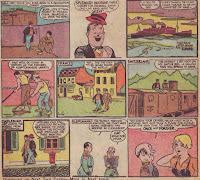 Globetrotting Hideouts & Hoodlums campaign face a serious dilemma -- how fast do you gloss over travel? Do you establish a sense of place for each locale at the risk of bogging down the game and losing your momentum? On the other hand, do you rattle off names and images as fast as Roy Crane did here, on a speedy trip across Europe?

Should riders always be able to get their mounts to attack? No, a mount should be treated like any Supporting Cast Member outside the player's control. The Editor should make an encounter reaction roll each turn to judge the animal's temperament and willingness to engage in hostile acts (maybe with some modifiers, like a -1 per level of the Hero?). 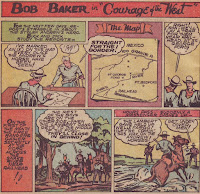 Map handouts are useful for your players, even if you can only draw a rough map. It's important to include any relevant information they need to solve the scenario on the map. 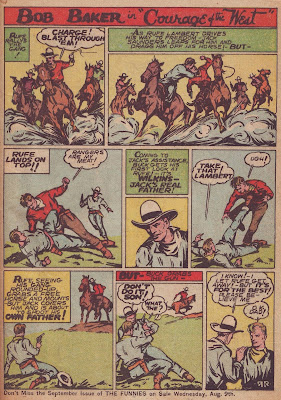 This is interesting to me. Jack leaps and tackles Rufe off his horse. Obviously, Jack rolled to hit. Then some other mechanic came into play, like maybe a save vs. science for Rufe to keep from being unhorsed. Now, how I would play it, Jack would then control the action and wind up on top when they landed -- but in the story Rufe reverses and winds up on top.   What happened there, in game mechanics?  Rufe counter-attacked with grapple in the same turn and also hit. But how to determine which has the advantage over the other?

One way would be to compare to hit rolls, with the higher roll having the advantage. Another would be to compare saving throws, with the worst save vs. science winding up on bottom. Or, since both combatants hit their target numbers, and are normally not penalized for not going x number higher than the target number, simply roll a d6, with evens being Jack on top and odds being Rufe on top. You only have to go so far into using dice rolls for fairness; a lot of the time, dice rolls actually represent the chaotic randomness of combat that the Hero can't control.