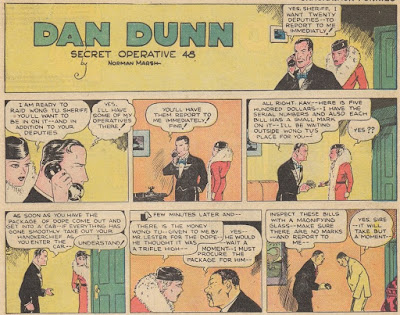 Twenty officers for back-up, Dan? Thanks for ruining my adventure by sitting back and letting a small army of non-Heroes take all the hits!

At one time, this would not have penalized Dan at all, XP-wise, as the original rules for Hideouts & Hoodlums called for experience point awards for defeated mobsters to be awarded in full to all participants. This was handy in the message board-based playtesting, with its slower pace and level advancement, but I completely reversed this call in my recent "1.5 ed." changes after much more live session play. Making players think twice about how many people they bring into the hideout ("Hmm...I'll have to split XP 21 ways...?") actually helps better emulate most Golden Age comic book stories with lone heroes.

To be fair, Dan's player might just be high-balling here, realizing that the Editor may not want to give him 20 officers for back-up and is looking for a high compromise number. Now, if he was looking for a number of back-up officers equal to his level, I probably would allow it right away, but for a higher number like that, I would make an encounter reaction roll, and it would have to be a very friendly result to get that many. 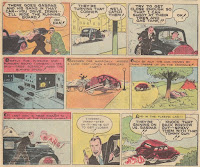 I have recently posted, and been giving a lot of thought, to game mechanics for car chases. Obstacles -- lamp posts, peddlers carts, trees -- should be getting in people's way all the time in car chases, each one requiring a save vs. plot from the driver to avoid crashing into. 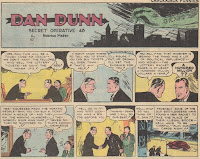 And this I just find funny, how this page talks about a lottery like it's a terrible scam, and how far we've come in being permissive of gambling in this country. What's really interesting, though, is how Dan says booze is still illegal. That means this adventure took place no later than 1933! 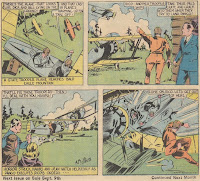 This is from Capt. Frank Hawks, Air Ace, and it got me to thinking...could the wrecking things table be used in reverse? Could I use it to figure out what a robot or a car -- or a plane -- can wreck, when they go up against each other? It needs more thought, but I'm thinking yes. 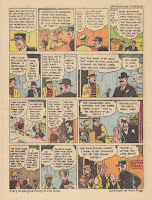 This is Freckles and His Friends.  There's some pricing information here -- such as a "trick" horse fetching between $500-650.  The boys' errands show that they could earn a quarter for running a grocery errand, 75 cents for fixing a radio, and 35 cents sounds like an average laundry bill. 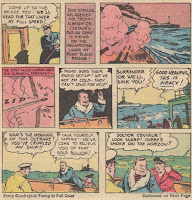 Dr. Centaur's tip for attacking a ship: take out the foremast first, to disable the ship's radio. That way they can't call for help. 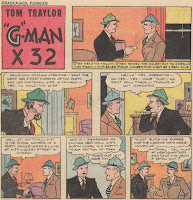 I don't know if just anyone could "reverse look-up" a name and address by a phone number by calling the operator, but G-Men apparently could. Maybe any Hero who makes a positive encounter reaction check can too.