Not a strong offering from Dell anymore, The Comics still has some material of interest to us -- well, me, anyway -- in it.

For one thing, Dell was still paying for good gag filler... 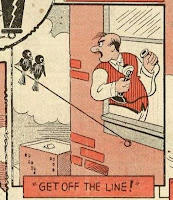 And Rod Rian was still inventive (if not particularly good).  Here we get a giant, dinosaur-like monster just called a "huge beast".  It's unusual in that it has grasping hands, and appears like it could rake with its hind legs. I am toying with calling it a chasm beast, since it appears in a chasm, though I'd have to take just a wild stab at Hit Dice.  Maybe 9 HD?

And then we get a living skeleton. What completely random wandering encounter charts! 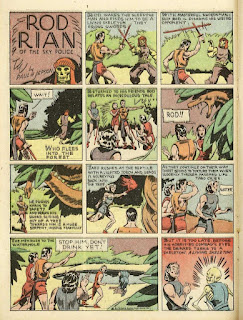 We have a precedent for undead needing to make morale saves.

We also get a huge snake -- which must mean it has half as much Hit Dice as a giant snake (given the large/huge/giant classification scheme).

But the greatest idea is a cursed watering hole where anyone who drinks it has to save vs. spells or be turned into a living skeleton! Actually, I felt a big gypped by the next page, where it is revealed the water only makes the non-skeletal parts of the body invisible temporarily. 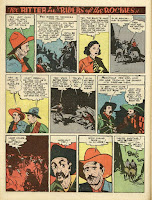 The lesson here is that, when your trap is too good for the Heroes, you can always place some dumb guard nearby who can be easily tricked into freeing the Heroes.

This is from The Enchanted Stone and sabre-toothed cats were first statted for Hideouts & Hoodlums in Book II: Mobsters & Trophies.

Bulls have, weirdly, never been statted for H&H.  I would probably make them 4 HD, but with 8-sided Hit Dice?

It's also handy to have a dog companion so they can run back and get help if something happens to your Hero. 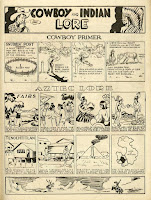 I don't know how accurate this Aztec Lore is, but it could prove helpful for anyone running the classic module C1 The Hidden Shrine of Tomoachan adapted to H&H -- or even a H&H-Empire of the Petal Throne crossover! 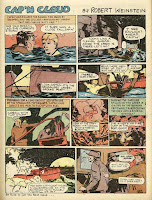 I like the thought of this as a trap, even though it was not intentionally placed in this installment of Cap'n Cloud.  The Heroes have to get across a body of water coated in oil, and have a limited time to do it before burning driftwood floats down into the oil and sets the room ablaze.