I still haven't seen any spies in action, but there's some interesting aviator action here. Why does one plane simply go down and the other burst into flames? Recently, I suggested assigning hit points to cars for car chases and the same can apply to planes. But what happens when a car or plane reaches zero hit points? Is it enough to say the vehicle is wrecked? Is everything else flavor text? 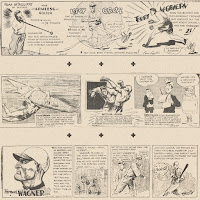 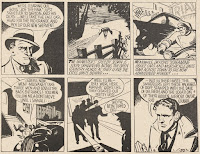 This is Inspector Dayton in the lower right hand corner. His Editor handed him a really easy clue to follow the bad guys. But I shared this for the really good advice for novice players in the two panels preceding that one -- always cover the back exits, and always go in with flashlights. 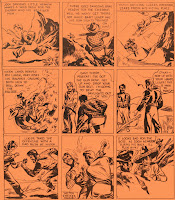 This is Wilton of the West. I've talked plenty about disarming shots, with missile weapons, and disarming with a "called shot" type attack, but here Wilton's opponent just seems to be accidentally disarmed while they grapple. Maybe I've been going about this all wrong. Maybe all hits in combat should have the same random chance of disarming the opponent? It might help make unarmed combat more appealing... 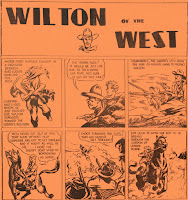 I wonder if there should be some sort of game mechanic for drawing fire. I've already toyed with how to shield an opponent when you want to take a hit for someone else, but drawing fire is slightly different. It seems a requirement is to be behind cover, and try to trick your opponent into shooting at your cover instead of a better target. Maybe, if you spend your whole turn drawing fire, one opponent will have to save vs. plot or shoot at you, with a slight bonus to your cover adjustment (like -3 to be hit behind hard cover)? 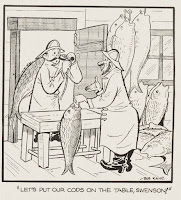 And, lastly, I really like this pun. Bob Kane had a knack for humor strips.

(Scans courtesy of Digital Comic Museum)
Posted by Scott at 10:49 AM