I've been doing this for almost a whole year now and, during this run of examining the comics from 1935-1938, there have never been more than seven U.S. companies publishing at a time (and I only have access to five). So it's a Christmas treat to finally read the first comic book from "new" publisher, Fiction House. There's some familiar stuff here -- Will Eisner's "Hawks of the Seas" picks up right where it left off in Quality's Feature Funnies, Bob Kane starts his second pre-Batman feature, Peter Pupp, Mort Meskin is the first artist on Sheena Queen of the Jungle, and future comic book virtuoso Jack Kirby debuts with an adaptation of The Count of Monte Cristo.

I don't share a lot of funny animal strips here, but when they are focused on adventure I will. Some campaigns begin loosely, with some optional directions for the Heroes to take it in. Some campaigns (the "sandbox" campaign style) sets up all the options for the campaign in advance and lets the players decide entirely on how to explore it. What happens to Peter Pupp is the complete opposite -- before he's had more than a moment to roleplay, he's kidnapped in his sleep and taken on his first quest.

One of the benefits of not taking your Hideouts & Hoodlums campaign too seriously is that you can do anything with it? Want them to go to the moon to find out if it's made of cream cheese? Just put them in a rocket ship and fire them out of a giant cannon at the moon? Now, if you want to give them control over the rocket, you can plop other destinations in Earth orbit, like these totally impossible plantetoids. Remember, even though astronomy said this wasn't so, no one had yet been to space to find out for sure, so all this science stuff could be taken with a grain of salt (heck, some people still live this way!)

We don't actually see any of Spencer Steel on this whole page, but we do get a glimpse of a villain hideout, accessible through a garage with a sound-activated door. In the private office is a secret door that leads to an elevator that does down to an underground laboratory (stairs go back up, presumedly to a floor in between). There's a nice amount of detail to the lab here, handy for an Editor looking to describe one on the fly.

This is some of the earliest Joe Simon/Jack Kirby art in print, three years before Captain America. You can see some detail of a mad scientist's mind transfer machine here.  Mind transfer devices were introduced back in Book II: Mobsters & Trophies. 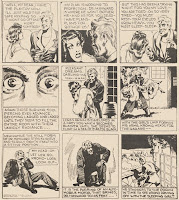 Hypnosis is currently a 1st level power for Superheroes. But does it need to be a skill that everyone has a chance to use? Though, if Kromo is a supervillain, maybe that explains his goofy name... 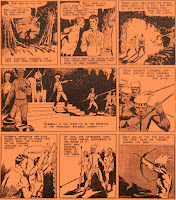 This is the cave-throne room of Sheena, Queen of the Jungle. Though the ceiling is festooned with stalactites, the floor has been cleared and smoothed. There is a dais and throne and -- more importantly -- note the oriental urns on either side of the room...

Clues explained on this page!  Note that, although Persia was officially called Iran since 1935, it was still commonly called Persia in the West for many years afterwards.