Made it to February 1940! Man...it's taken me a long time to get through these last few months.

Today we return to Crestwood, which will soon be absorbed by Harvey, and -- holy cow, it's a stegosaurus! Normally, comic book covers back then were more exciting than the actual contents, but I have a good feeling about this one...

Sorry, got distracted. Now, back to the contents!

We start with Shock Gibson doing good deeds. Technically, the first one is a plot hook, not a good deed, so he doesn't get 100 xp just for going to South America. Rescuing the "native" (blacks in South America...?) is definitely a good deed.

Yes, he can deliver a disarming attack even in unarmed combat.

I think someone forgot to tell the artist this was South America.

Here we see a spear, cutlass, and a whip brought into combat, and the whip shown as the most effective. It also seems to function as a missile weapon, attacking before the "natives" can reach melee range.

It's interesting how Heroes have no trouble picking up and using weapons, but they rarely keep them. I wonder if that needs to be a rule, or an optional rule, that a Hero has to save vs. plot to keep any item that doesn't fit the theme of his hero identity.

Knives break on impact against the Super-Tough Skin power; the electrical field is just flavor text.

The attacker fails a morale save and surrenders. Other than having to follow-through on his surrender, he is under no compulsion to do anything else, like not be a racist scumbag any time in the future.

The writer and artist continue to dig themselves into a deeper hole, as the rescued "native" is now named Bombi, which doesn't sound remotely Hispanic.

At least they got animals right, as jaguars and constrictor snakes can both be found in South America (and have both been statted for Hideouts & Hoodlums already). It would certainly make sense to put them on a wandering encounter chart for South American jungles.

I'm not sure cracking a snake like a whip would do it enough damage to kill it, but what I'm really unsure about is how to apply a game mechanic to this. Is this just a grappling attack with a little extra flare added to it? And I'm really not comfortable with allowing grappling to do lethal damage; it should always lead to unconsciousness, I feel.

I had to look this up, but head hunters are/were a thing in South America, and in fact this probably narrows down where the story takes place to Ecuador.

It's hard to say what's the most unrealistic thing in this story, but a contender would have to be the arrow piercing his helmet, and still being in good enough shape that it can be pulled out and reused. Technically, there is no rule in H&H for ammunition recovery, but common sense should prevail here.

The Extend Missile Range power can allow Shock to throw an arrow with the force of a bow. We could, in theory, say that anyone could throw an arrow as an improvised weapon, which only do half-damage (1-3).

Again, the fauna is accurate, as electric eels can be found in South America. 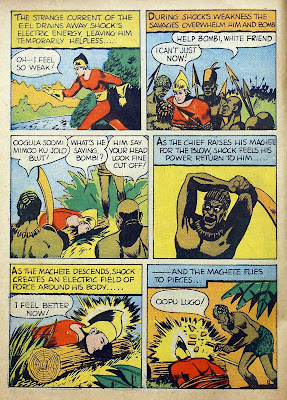 Wha--? Electric eels can drain superpowers? It's hard to even wrap one's brain around the attempt at physics here, but he would have been better off just saying the water diffused his powers.

I have race-based limitations in 2nd edition, but not class-based ones, so it's hard to explain what's happening here in H&H terms. Maybe it's simply Editor's fiat. Maybe we should really treat this as a power-draining eel and stat it!

Super-Tough Skin has the knife-breaking thing baked in because it's already becoming a superhero cliche, but sword-breaking is something else that I can't really explain with the rules yet. Maybe the Editor is treating this as an extension of the knife rule, with a 50/50 chance of it applying to swords too (being, essentially, long knives). Maybe this is just an example of wrecking things, but should Shock still be allowed to wreck while tied up? Perhaps the Editor can allow some leeway here, based on the flavor text the player uses to explain how his wrecking things power works.

Rope making is a skill that Shock would have to make a skill check for. I would think it's fairly easy work, just time-consuming, so it would require 1 basic skill check per turn. The leap is clearly one of the Leap powers.

It's weird, though, how Shock's hand sparks as he's holding the rope. Is he trying to electrify Bombi while he's climbing...?

And -- at long last -- the payoff! Shock and Bombi finally see dinosaurs!  But that's where we leave off on today, leaving the best parts of the story for tomorrow.