A bubble genies is... an unusual, modern spin on a classic. The Bubble Pipe of Genie Summoning is not something your players would be expecting, that's for sure!

Sifting through the racism, we get to the bottom and the image of a man swinging a bull around by its horns -- gruesome, if it wasn't so cartoony. At issue here is, did Wahoo have to activate the Raise Car power to do this, and would he have to? What is going on is clearly combat, so whether the bull is airborne or not seems irrelevant and is merely flavor text. Two exceptions I can think of would require Wahoo to activate the power for this: 1) he plans on throwing the bull next, which does require him to be able to lift it into the air, and 2) he is doing this to intimidate the bull and force a morale save, without hurting it any further. Flavor text cannot activate morale saves, so a power would have to be used for that.

Krag, on the other hand, doesn't seem to be as smart at setting up traps as Scorchy is. Why would he step on the starter if he thinks the motor is busted? And wouldn't his chief priority still be finding the girl? 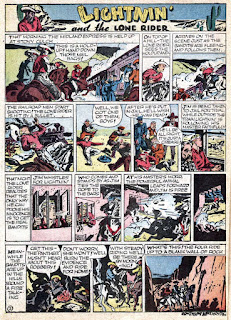 The Lone Rider's true identity is revealed in this story -- and soon thereafter he is easily subdued in combat once the mystique of his mask was removed. 1st edition Hideouts & Hoodlums had a rule for superheroes that they could only use their powers in costume...but I'm wondering if that rule was not misplaced and a better fit for the mysteryman class all along. Perhaps the mysteryman should be denied his signature move when not wearing some kind of mask.

It seems a small point, but I thought I would explain that saving a dog from a burning building is still a good deed, and worth just as much XP as saving a person.

(Scans courtesy of Comic Book Plus.)
Posted by Scott at 11:33 AM