Random design, that makes no internal sense, is a feature and not a bug of Old School dungeon design -- and the same seems to be true here of outdoor hideouts. Does it make sense for a band of slavers to have a stockade for keeping elephants? Not really. Does it lend the hideout a fun, zoo-like quality? Yes. A seemingly unrelated question: can elephants be forced to make morale saves simply by flying low over them in an aircraft? The answer to that is apparently yes too.

This is Ted Parrish, Man of a 1000 Faces, and he seems to really like different modes of getting around. First he's got an ordinary car, like any starting character can buy. Then he's got a plane that he only uses to do recon in for one panel, and we don't know if he owns it or he rented it. Lastly, he has a jalopy with a "powerful engine" hidden in it -- that sounds like trophy transportation to me, and I wonder where he picked that up.

That's a pretty good place to put a sentry with a machine gun (as long as you're okay with your Heroes getting their hands on a machine gun!).

I like how Ted's plan is to summon the state police, but then he gets impatient because they're taking too long and he decides to just do it himself. I've had players like that.

This could be our first time seeing a Hero launch himself from a catapult before. I don't care how good his save vs. science is; I'm pretty sure he's going to take damage from this.

Okay, maybe the Editor gave Ted a roll to hit the window (AC 4, maybe? It is a pretty small target and catapults are not accuracy weapons), and then only 1-6 points of damage for hitting the window. I'd give him at least twice that had he hit the wall.

We get some details of a two-story ranch house with attic here. Note the spacious rooms and spartan furnishings. Better for making room for big combats.

I was just talking about plane rentals too -- now we know how much they cost.

I don't think planes were so unreliable in 1940 that Heroes will have to worry about a random chance of the motor dying per flight. Rather, this looks a lot like the set-up to a scenario before play begins, with the flight and the engine failure being prearranged to get Biff in the right spot.

Of course, play could begin right at panel 3, requiring Biff to make a skill check for a safe improvised landing. 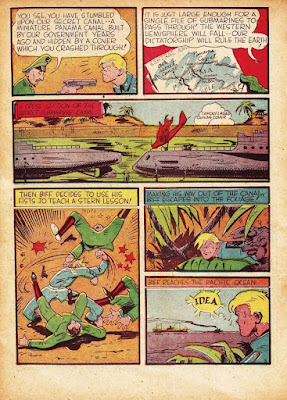 I'm confused by this page. If the entire canal is underwater, and Biff crashed into it, where are Biff and the soldiers he's fighting standing? It's like we're missing some panels where he climbed into the submarine.

It interests me that the secret canal was dug "years ago." Often in these stories, Heroes stumble across something like this when they are new, or still being built, before they can affect history. It would be interesting to conjecture how a secret canal through Panama would have impacted world history.

I also have to say, I'm liking the distinctively cartoonish art on Biff Bannon.

Convincing a tugboat captain to put someone else's freighter and his own livelihood at risk like this would have required an encounter reaction check at a substantial penalty, maybe as high as -3. Biff's player is a lucky roller, or Biff has a high Charisma and a bonus to offset some of that penalty.

Spotting a periscope in the water, at distance, without binoculars or a telescope? I'm going to rule that Biff only had a 1 in 8 chance of spotting it under those conditions. Lucky roller indeed!