Here's the Raise Bridge power being demonstrated. Thanks Samson!

That is a strange-looking armored car. Armored cars have been a trophy item since Book II: Mobsters & Trophies. It's kind of odd that Dragor shows up just then, so close to where the fighting was, but it's awful handy for the plot.

This is Stardust's story, though he's not in it yet. This is a pretty major plot, with maybe the first Presidential kidnapping in a comic book. The fake bomber started out as a seaplane.

Weirdly, Japs come from Capania instead of Japan.

It's not clear what these black-light bombs are, since they appear to be releasing smokescreens instead of darkness.

Stardust uses Teleport without, apparently, even being anywhere near the scene (though maybe he is, but just invisible. Who knows with Stardust!).

The bad guy's name is actually Rip-the-Blood. Rip has a machine that somehow detects Stardust's approach because of his ...speed? So it's like a Radar gun for Stardust.

It's hard to figure out how this windtrap works, exactly. The whirlwind effect seems like it would hold someone there, like a Hold Person effect. 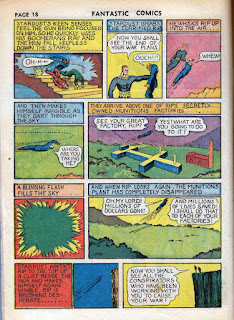 The boomerang ray is the 4th level power Turn Gun on Bad Guy.

We don't really get to see what the blood-drying needle bombs do, but they do make people "helpless."

Then we get a Fly power, or maybe a spell, coupled with the spell Invisibility (it's definitely not the power Invisibly Fast, as Rip is still visible).

I would allow the munitions factories to be wrecked as battleships. We don't know if Stardust crashes into them or wrecks them at range, though Rip's ignorance seems to imply they were wrecked at range.

Mass Teleport, that can affect up to 10 people at once? And makes stops along the way? That's got to be a 9th level spell. I wonder, though, if maybe a lot of Stardust's tricks are illusions and he just likes messing with people before he throws them off cliffs?

It's interesting to me that, to emulate some golden age stories, Hideouts & Hoodlums has to be modified to be more like Dungeons & Dragons. Chainmail armor is considered trophy armor in H&H, but would be purchasable starting equipment for The Golden Knight.

Traveling is going to be much more challenging in The Golden Knight's time as well, which is what makes it especially odd that The Golden Knight seems to have landed in Cairo, to head cross-country towards Israel, whereas most of crusaders followed the Balkan route around the Mediterranean.

It's unclear how many knights Richard brought with him, but only four are ever pictured with him. That means the Saracen force they encounter is at least 50 men strong. Without magic support, that seems like suicidal odds, unless some of the Western knights are very high in level.

That the battle ended with the deaths of all the Western knights but Richard suggests fanatical morale on the part of his followers. There must have been quite a few morale saves before it was over.

(Scans courtesy of Comic Book Plus.)
Posted by Scott at 3:29 PM