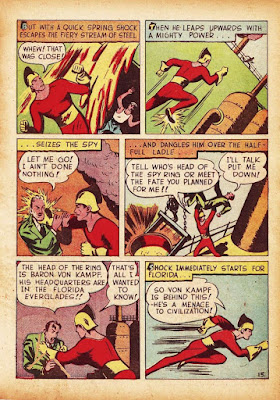 Oh, this is interesting, or at least I always find it interesting when a superhero has to dodge instead of just take the hit. How much damage would a stream of fiery steel do? And can we work out a guideline for assigning such damage in the future?

A 1st degree burn starts at around 111 degrees F; let's assume that is for 1 point of damage. If we double the max damage every time the temperate doubles, that gets us to 1-8 points of damage at 888 degrees, which is the damage assigned to crossing fire in the Basic rules. Since steel melts at around 2,700 degrees F, that puts us about halfway between 2-16 damage and 4-32 points of damage, which maybe we could put at 4-24 damage. Shock would still get a save vs. missiles for half damage. 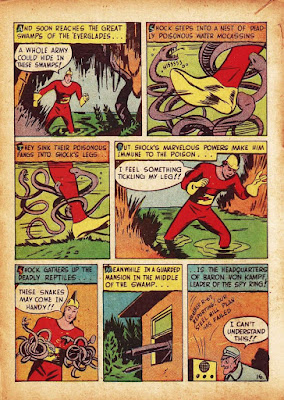 Water mocassins aren't something you see in comic books every day. Hideouts & Hoodlums already has an entry for poisonous snakes. Does it need to distinguish between a water mocassin, versus a rattlesnake, or just use the same stats for both?

There's currently no power that makes someone immune to poison (though there could be!), but the 1st-level power Different Physical Structure gives a high saving throw bonus and could apply here.

Shock is buffing himself with a power that either would not have been effective against the molten steel (like Nigh-Invulnerable Skin), or simply did not have this power prepared that day (assuming this is a separate day; he did get all the way to Florida between scenes).

It's an interesting tactic to collect poisonous snakes and throw them at your opponents.  I'm not sure a Hero should be the one doing it, though. Using poison as a weapon seems to be decidedly un-heroic. Perhaps Shock made his save vs. plot to avoid genre conventions here, or maybe the Editor allowed it because he threw snakes at them to invoke a morale check, not as an attack.

The various "Race the (blank)" powers say the superhero can move at so and so speed, but it does not specify how the Hero moves at that speed. So super-fast rowing is definitely a thing that an Editor could allow.

I've never spent much time in Florida and I was totally unaware this is a thing, but apparently Florida has lots of islands around it.

This is 1940, so Shock's concern isn't that Germany might be planning an invasion; his concern is that their base being too close to the U.S. violates American neutrality.

When raiding a submarine base, your first tactic should always be to raid the torpedo dump first.

Remember, Von Kampf's  goal two pages ago was escape. He has no reason to attack the ocean liner other than just being evil and not being able to help himself. Maybe villains should have to roll for saves vs. plot as well!

I'm not sure how Shock knows there are women and children aboard the ocean liner; it seems like he's just guessing. Unless, maybe, the Editor gave him a skill check to see if he could spot passengers on deck from where he was?

This page is a little troubling, as a lot of turns have passed since Shock activated his "Race the" power (surely there were some combat turns there while raiding the base!). Unless Shock is higher in level than I think he is (and last post I discussed how Shock might have some brevet ranks), it's possible he prepared the same power twice and re-activated it.

Given how comic books work, I think Von Kampf is underestimating when he says he has a 1 in 1,000 chance of survival. If I was using the villain class from 1st edition (Supplement II: All-American), Von Kampf would be level 3, maybe even level 4 by now, with a 40-55% chance of survival under mysterious circumstances. 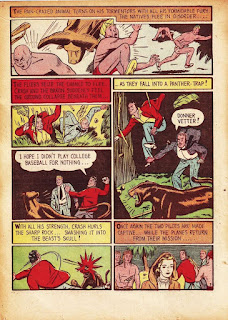 This is from the back-up feature Crash, Cork, and the Baron. It's a very rare instance of a water buffalo coming into play in a combat, apparently with devastating effectiveness.

What's surprisingly not effective? Panthers, as this one is taken down with a single thrown rock. Maybe it was starving and down to its last few hit points. Or, even more disturbingly, I may have to stat water buffaloes better than panthers.

Combining a mobster type with a trap -- like putting a panther at the bottom of a pit -- is a good idea, though the story is unclear if the panther was part of the trap or the trap was for the panther and he just happened to still be in it.

It's also unclear how they managed to get captured again. Maybe they could not think of a way to get out of the pit on their own.

I would like to think my players would be more suspicious of a prisoner who just happened to still have her mongoose in her pocket, and her captives either never noticed or forgot about it when they put the cobra in there. It seems like a set-up to get you to trust her, so she can turn on them later.

If you thought "mongoos" looks like a misspelling -- you're right.