I like the early, pre-Davey Samson stories, and this one is no exception. Here we see Samson dealing with Hitler, here called Dragor. I'm not a fan of concealing real places and people with fictional counterparts, but Dragor is a pretty good villain name.

It's possible that I like this story just for the giant flame tanks. Sure, flame tanks would be impractical as all get-out, but there's no way an army could face those and not be terrified. The range seems pretty good on those things for flame throwers, but it's hard to judge just how far by that panel. 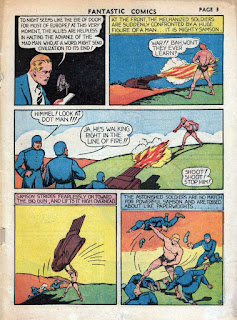 What? Those flame tanks looked gigantic just a page ago. Now, as soon as Sampson gets up close, they are barely bigger than he is. It must be some perspective trick to how they are designed?

Since the flame gun's flame seems to be an area of effect, it should not just miss Sampson like that (if he saves vs. science, he would take half damage). He must be buffing himself defensively with a power like Imperviousness.

Lifting a small tank is possible with the Raise Trolley Car power, which buffs his encumbrance limit.  Mopping up the soldiers by hand could be an example of Multi-Attack but, really, if he's operating as a 6th level superhero (which would take 5 brevet ranks this early in his publication history), then handling some 1st level fighters should not be a problem for him, even un-buffed offensively. 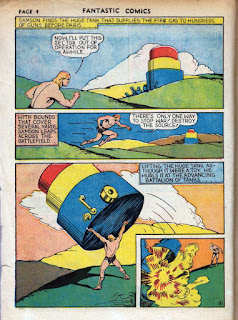 The colorist got plenty creative here; personally, I think such an important tank would have been more likely camouflaged.

Making 10-12' leaps just while covering horizontal distance does not seem to warrant using a power and could easily just be flavor text.

It is very unclear how the gas gets from this central tank out to the field, especially since there are no hoses or pipes leading from it. I guess this was more of a refueling station?

Unless the gas inside that tank is helium, it likely far exceeds the 720 lb. limit of the power Extend Missile Range III. This feat could be duplicated by combining any of the Raise buffing powers with the power Wreck at Range.

How does Sampson get to the roof without revealing himself to the people inside? Here is where leaping as a game mechanic comes into play instead of just flavor text. Since he's only leaping 30', this could be Leap I or even just the leaping ability of aliens. Since this version of Samson (see my Samson entry in Supplement IV, where I explain there were actually three different Samsons in the same series) has no origin story, he might as well be statted as an alien.

Since a bridge is a structural feature, it gets wrecked like a car.

This turbine was on my mind when I made generators a category for wrecking.

This page is a little odd; Dragor raced out of the room not that long ago, but Samson has no idea where he went? Evasion must be pretty easy, or tracking must be hard. Here, Sampson forces morale saves until someone tells him where Dragor is.

No players like mazes and they are awful hard to navigate while in-character. Wrecking things is an easy way to circumnavigate that problem.