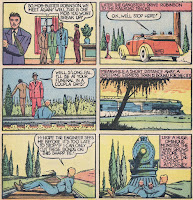 Mob Buster Robinson is in a pickle of a death trap here. The Editor gives him a sharp rail and one turn to use it to cut himself free. He then has to beat the train in initiative in order to move first, or he's run over and killed (a train can be assumed to do enough damage to automatically kill anyone not being buffed by a defensive power). 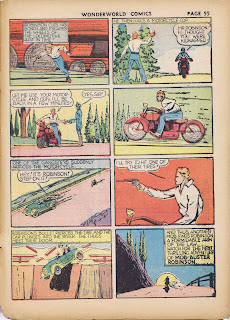 I have written before about how level title is a soft game mechanic that essentially acts as a guideline for how much the hero can boss around non-hero characters. At this point, with only four 4-5 page long adventures under his belt, Robinson should be only a 2nd level fighter, also known as a detective. It seems a little convenient, to me, to have a beat cop surrender his motorcycle and gun to a detective just on his say-so, so something else may be going on here. Maybe he rolled a 12 on his encounter reaction check?

The chase scene is also ended conveniently fast. My new chase mechanics in 2nd edition slow it down somewhat, though they still play fast (I've had cause to use them twice now in my current campaign). Nothing in my rules allows for shooting a tire to make it skid off the road, though -- unless you treat the bullet as a halting obstacle (which is a bit of a stress).

This (page from "Spark" Stevens) is one of the first times a blow to the solar plexus has any kind of special effect on someone in comics. Second edition has no hit location system, though I did introduce an optional one once in The Trophy Case. More likely, I think, this little man is classed as a mysteryman and poking with his cane is his signature move!