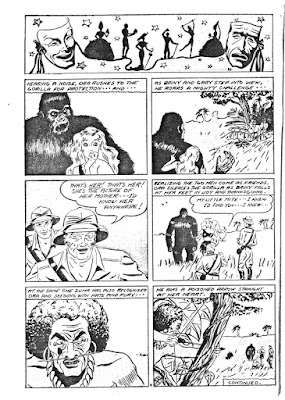 As another year of comic book reviewing draws towards its close, we come around to Centaur again. This feature is "Diana Deane in Hollywood" by Tarpe Mills. There's an interesting, albeit sexist set-up for a scenario here. Diana is a gender-reversed Tarzan in this story; being a woman, she "naturally" needs to be saved from the apes instead of becoming lord of the apes. The intriguing part here is, how do you rescue someone from a mobster without harming the rescuee? This page offers no solutions, but it does remind me that natives need to have a chance of carrying poisoned weapons.

This page of "Block and Tackle" is not the first time I've seen someone being shown to grapple and punch at the same time, but I still think that overly complicates unarmed combat and it is best to keep those attack forms separately. Of course, if I continue to see more evidence of this, perhaps allowing the two to combine would encourage more Heroes to go gun-less and attack with their bare hands...

Huh...after a lengthy absence, "Abdallah" returns, but not even on the same adventure it left off on! Here we see an ogre. Specifically, an Arabian ogre, but so far I see no reason to stat it any differently. Perhaps I should mention in the (next year's?) Mobster Manual that ogres can live in caves for very long periods of time with very little food.

Bats, piles of skulls, and roaring fires can all be hideout dressing, even though these things are normally associated with fantasy dungeons.


Here, we see an unintelligent mobster not taking advantage of its hostage. Editors must keep the relative intelligence of the mobsters they use in mind.

The ogre is making successful grappling attacks each turn. According to my rules on grappling, once you're grappled you can only attack back with grappling in that turn, but here Abdallah is winning initiative each turn and attacking with his sword -- and missing -- before being drawn back into a new grappling contest. When the ogre wins each time, he just throws Abdallah prone on the floor, as if toying with him. 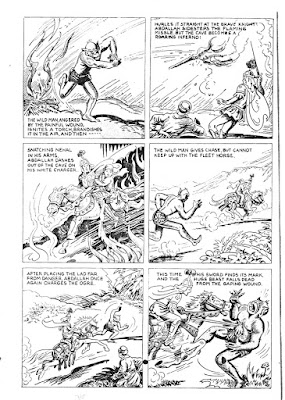 Throwing a torch is no big deal; anyone can toss an improvised club weapon as a missile attack. What is somewhat inexplicable here is how the cave suddenly becomes a "roaring inferno." Clearly the torch did not set the stone walls on fire. Perhaps this ogre should be statted as a 1st level evil superhero/supervillain/bad man, which would give it the Blast I power. In that case, the thrown torch is now flavor text for what triggers the Blast power.


Nowhere in the rules will you find swords being able to do extra damage as the result of a charge. It really seems like it should be a lance Ab is using in this scene anyway.


We also see evidence (which I had always presumed to be true anyway) that ogres cannot move as fast as horses. 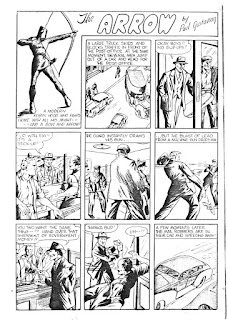 Bank robberies in comic books are as old as comic books, but the new wrinkle here is that the robbers are robbing the post office. At least, the text tells us it's a post office; it looks suspiciously bank-like inside, down to the on-duty armed guard. Perhaps the guard came with the special delivery.

Law enforcement works in mysterious ways in comic books, like this instance, where a man in his cell still happens to have $1,000 in un-confiscated money on his person. 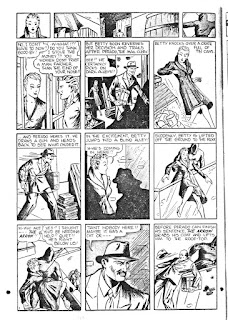 This is peculiar. Note how The Arrow is on the rooftop above them, yet is able to reach down way over the edge of the roof and grapple people. I have previously changed my ruling on The Arrow -- that, upon closer inspection, he's a superhero and not a fighter, class-wise. Here, we might be seeing a new power that would be called Extended Range, allowing you to make melee attacks somewhere common sense tells you that you would not be able to reach.


(Scans courtesy of Digital Comic Museum -- and yes, black and white scans seem to be the only ones there are.)