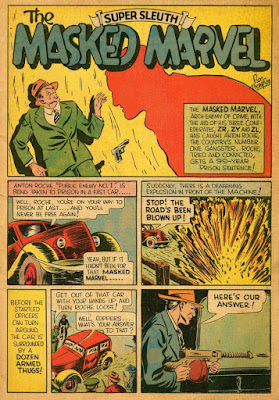 How sad if I wind up having to end out the year on such mediocre fare from Centaur!


Here we have the return of "The Masked Marvel." If some of this art looks familiar, it is because it was featured prominently in Books II and III of 1st edition Hideouts & Hoodlums. We see a master criminal at work with a high number of thugs working for him; I may have to up the "number appearing" range to 1-12 for thugs.


Note how most of them have Tommy guns, except for that one guy who only brought a pistol. Don't bring a pistol to a Tommy gun fight, Muggsy! In hoodlum descriptions, I tend to present a random range of likely weapons. If the Editor has time, he should determine weapons individually instead of having every mobster fight with the same thing.

Or are they all thugs? One or two of them may be gangsters instead, including the lone guy armed with a revolver. Gangsters are a new mobster type in 2nd edition H&H who have a skill for coercing people to get into cars, not unlike what we're seeing in that last panel.

Master criminals are 3+1 HD hoodlums, but I'm wondering if public enemy number one's need to be an even more powerful type of hoodlum. Maybe 4+1? 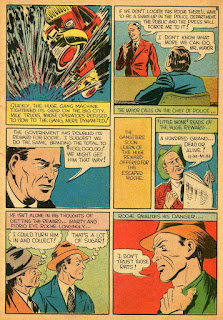 Here we see how high the bounty can get on a public enemy number one, at least in the comic books. The sum of $100,000 is rather incredible, considering that the bounty on John Dillinger was only $10,000.

That Zr, Zy, and Zl can be put in charge of a squad of policemen each, despite having really goofy code names, tells me they must be at least third-level fighters, which makes them the equivalent of sergeants.

It's almost worth mentioning that this story is the first time a sidekick character dies in a comic book. But then, it's just Zl, so no one was ever shaken up over this. 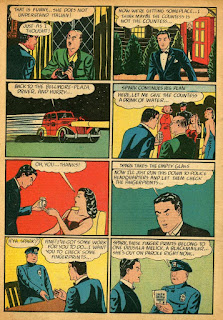 This is Spark O'Leary, Radio Newshawk. The scenario is that he has to prove the Countess is a phony. Now, some players might just choose to beat her up and then frighten a confession out of her, but Spark goes out of his way to collect lots of evidence.

I point out the fingerprint collecting in particular because this is a go-to for my players, despite the limitations on it at the time. They have to remember that there is no national database of fingerprints they can scan for a match in; the local police station can try to match them against the ones they have on file. They can then try contacting other agencies, but it will be a slow process. At best, I would let you have a save vs. plot to try and get results back as fast as Spark gets them here.

What, I wonder, is the origin of the "organ that can create destructive sound"? It's not quite common enough to be a cliche, but it surely didn't originate in this obscure comic book and this Dan Dennis, FBI story. It's worth pointing out that the villain here is called The Fiend.

The organ sure seems versatile; it can not only wreck, but it can "paralize." My first thought that The Fiend was a mad scientist is giving way to a new theory that he is a magic-user and the organ serves as his wand (since he seems to be casting Hold Person here). Too bad The Fiend is such a poor speller...

Players finding trophies may often wish that they were all properly labeled with instructions, like potion bottles clearly (and honestly!) marked with their contents. At least the Editor, in this case, only gave the player a clue as to which button to press on the organ.

Of course, there goes my magic-user theory, as Dan would not be able to use a wand unless he was also a magic-user. It seems the organ is, instead, a powerful trophy item with a range of, at first, random effects Heroes could trigger -- sort of like a Wand of Wonder, until they figure out how to play it.