Well...who would have ever expected this trick to actually work? If I were playing State Trooper O'Keefe, I would expect at least a -2 penalty on my save vs. plot to pull off the ol' "fight me with your bare hands" trick.

Despite being knocked out at the same time, these two somehow wake up an hour apart from each other. This not only contradicts H&H healing rules (in both editions), but the hour it takes Shorty to undo his ropes seems unusually long for skill checks to escape bonds (this being a 2nd ed. thing only). Of course, if Shorty is only a supporting cast member, then the Editor can fudge things a little.

It's unclear how jumping off the tables is responsible for knocking the hoodlum out; the height advantage might have given him a +1 advantage to hit, or maybe it just explains how he got his surprise attack. Lighting conditions come up in both editions of H&H, though this instance seems a bit more complicated than most. Being silhouetted with light in the doorway, O'Keefe might have a +1 situational modifier to hit, while being -2 to be hit while partially concealed by dim light and fog (or maybe even -3).

Detective John Degan has skeleton keys (a minor trophy item in both editions) that keeps you from having to make a skill check to unlock doors.

The backstory here is that a museum idol seems to be killing people who went on an expedition to Tibet. Li Wan is apparently able to control the idol when he goes into a trance.

The idol, seen on this previous page, is like a huge bronze golem, only it cannot animate without a "high priest" controlling it with his mind. What constitutes a "high priest" is open to interpretation -- taking a wild stab at it, I'd say any magic-user of 4th level or higher. The golem is strong; it can kill quickly with its claws (2-12 damage?) or by grappling (+2 to hit and damage?). It's tough too; it seems to need magic weapons to harm it and I'd guess it has 10 HD. This one's definitely going in the Mobster Manual!

Steel yourself for some racism here -- we need to talk about yellow peril hoodlums. I put them in 1st edition because I wanted a hoodlum with some cool low-level monk moves. I'm not sure I succeeded at it and, what's worse, the comic books I've read so far don't really support cool oriental fighters. Look how easily Degan takes out these bunglers, who even manage to take out their boss for him (fumble charts for mobsters only, maybe...?).

At last, the debut of The Eye Sees and one of the strangest heroes ever published. The Eye was represented in first edition by the floating eye mobster, and in fact some chroniclers of the Golden Age have described the Eye as precisely that. I think the Eye is really more than that -- some uber-powerful being able to pierce the veil of space-time and look in through the gaps he creates on any situation he chooses to. Of course, the easier explanation for that power is Clairvoyance.

Telepathy is the second power he seems to demonstrate here.

An unusual tidbit -- for some reason the Eye is well-known in Afghanistan? 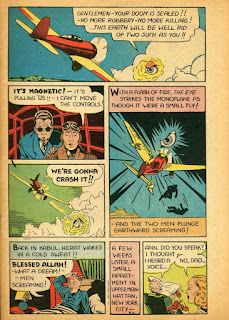 The mobster calls the Eye's power magnetic -- and first edition did have a Control Magnetism power -- but it could just be Wreck at Range.  Or, since the rest of the Eye's powers seem more like magic, maybe it's just a Lightning Bolt?


It's also worth pointing out that The Eye doesn't seem to be able to Teleport, as he doesn't turn up in the U.S. for weeks after leaving Afghanistan.

(Scans courtesy of Comic Book Plus.)
Posted by Scott at 9:25 PM