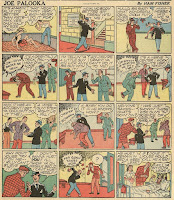 Hideouts & Hoodlums' combat rules do need to take special maneuvers into some consideration, but I am very hesitant to allow a combat move like this neck twist (demonstrated in Joe Palooka), which bypasses the hit point mechanic and automatically* removes a combatant from play (*and, yes, I realize that it wouldn't really be automatic if a saving throw was allowed). It seems too much like the superhero power Sleeping Nerve Pinch to allow just anyone to use. 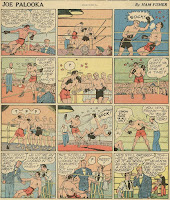 This next page serves as an example of why I don't want too realistic a combat system for H&H, but for a different reason. While super-neck twists could end a fight faster, complications incurred in addition to hit point loss -- like blurred vision -- would slow fights down and put combatants at an increased disadvantage the more they are already losing. It may be more realistic, but it does not make for epic fight scenes where the good guy, on the ropes, keeps fighting in peak form all the way up to the end. Further, such an additional penalty might scare players off from risking hit point loss during combat at all. 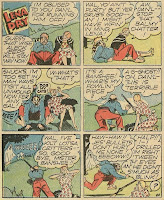 It turns out not to be a real banshee haunting Lena Pry and Daniel, so I won't be adding that mobster-type to H&H yet, but this story never does explain, over the following pages, how the "banshee" survived being shot in the head. Fake undead still needs to become a mobster-type (not sure if I'll call them "fake undead" though), and maybe they should have some measure of real undead's special defenses until unmasked?

Although comedic, Archie O'Toole is still an adventure strip and could serve as the basis of a light-hearted campaign. I definitely think Count Morris Hackula of Brooklyn would make for a fun encounter. Here we see the traditional vampire power of being able to turn into a bat (and could this be ghosted by Will Eisner? Countess Hackula looks an awful lot like one of his femme fatales...). Except, on the next page, we learn that the Countess isn't really a vampire, but a jitterbug. When she bites you, you go mad and don't want to do anything but dance. It's a ...somewhat intriguing notion, though I don't know if I'll be adding jitterbugs to the mobster section anytime soon. 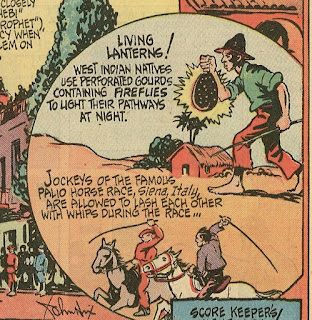 You never know with these non-fiction pages how non-fiction-y they really are. This one is As Strange as It Seems, and while I'm not sure how representative that really is of West Indies fashion in the 1930s, it's the first panel I've seen set in the West Indies in modern times. I just recently ran two H&H scenarios in that part of the world and had to rely on real world research to guess at what it was like.

True or not, I like the idea of "living lanterns" being a regional thing there and, if one of those scenarios ever sees print, I might add this in for color.

I could also see an exciting story where the hero finds himself in a horse race with little or no rules...

This is Espionage, by Eisner. I normally feel I can trust Eisner to have done his homework, but I'm a little incredulous this time that you could get a working plane in the cargo hold of a ship and not be asked for an inspection (though I suppose the machine guns could have been hidden elsewhere during inspections?). I'm also a little ...surprised that Black X keeps something in his wallet that identifies him as spy. 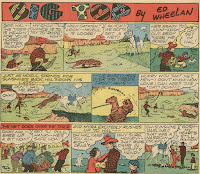 Speaking of things that surprise me, if a lariat is really able to stop a tiger, as shown here in Big Top, then why even bother using other weapons? Special maneuvers with lassoing is going to need more thought.

Here's an idea for incorporating war tactics and strategy into a game without war -- stage it as two "armies" of half-pints having a snowball fight, so that no one gets hurt in the scenario (well, unless one side fights dirty and switches to ice balls...).

This is from Off the Record. The first gag I think is pretty funny -- and the second one is another goat joke! Am I going to have to go back to tracking how many goat jokes I've seen so far?