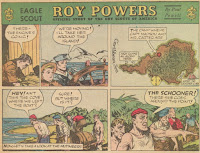 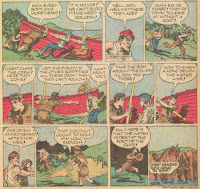 More evidence of improvised weapons -- like coconuts -- being able to do real damage.

If you put yourself at risk to save your comrades, is that a good deed (worth 100 xp) or just you being a good teammate?  It's a decision each Editor will have to make, either as a blanket judgment or on a case by case basis.

Speaking of things the Editor will have to make decisions on....Should he bother rolling random encounter rolls for supporting cast members, or just assume that nothing interesting is happening to them except when a Hero is around?  It could be a good source for plot hooks; if you're out of ideas, have a SCM ask for help with some mobster they encountered... 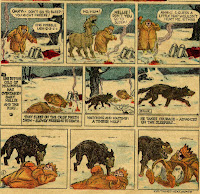 After what I considered a weak start, Oaky Doaks has developed into a strong strip.

There has been a surprising dearth of wolves as bad guys in the comic books so far, but here we see a particularly menacing one.

Speaking of coconut weapons -- monkeys are apparently vicious with coconuts. Maybe they should be able to throw 2 per turn, for 1-4 damage?