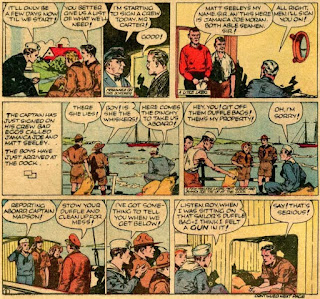 This is Eagle Scout Roy Powers, though a fellow scout seems to be the star from this page.

Players will often have to actively search the scene to find clues, but sometimes the Editor will just throw a clue into your lap -- or under your butt -- if you really need to have it.

This page also gives you some perspective between a schooner and a dinghy. It might help to know the difference between the two for a nautical adventure -- which I've surprisingly never done yet in any of my Hideouts & Hoodlums campaigns, despite how prevalent they were in the Golden Age. 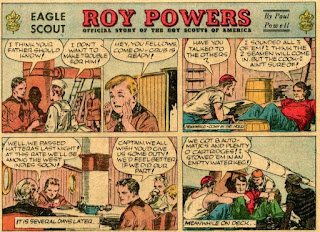 We also learn that a schooner only needs a crew of five (six counting the cook), so if you're going to do a mutiny story for a really weak team of heroes (like maybe two or three 1st-level heroes), then a schooner might be the way to go.

Of course, depending on which weapon damage mechanic you use for H&H, automatic firearms might be too much for 1st-level heroes to handle if you plan to use the expanded weapon damage tables (from Supplement I or The Trophy Case). 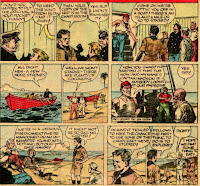 Speaking of low-level scenarios, I like how the villains aren't interested in killing the heroes here, but maroon them on a deserted island instead (capturing heroes happens a lot more in low-level scenarios).  And I love how happy Roy is to be plunged into a non-combat scenario involving finding fresh water and foraging for food. Now that's the kind of flexibility I like in a player! 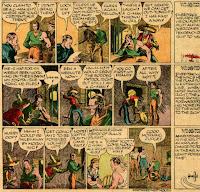 This is from SkyRoads.  I can't always follow what's going on in SkyRoads, as it seemed to try to juggle too large an ensemble cast without a strong lead character, but here it follows a G-Man wrongly imprisoned in a Mexican jail. I share it here for the ethical dilemma of the lawful hero given the option to choose to bust out of jail, or trust in the system. I did something similar in one of my H&H games just last night when a hero was offered a huge bribe by a rich corrupt politician. It's a fun way to force the player to think in character. 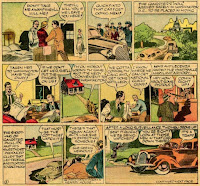 According to War on Crime, even a simple cottage can serve as a hideout. 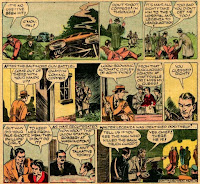 The first mention of Browning automatic rifles in comics. First edition H&H names specific brands of guns, including Browning, on the starting equipment list for historical context, but I will probably move away from that in 2nd ed.  These would be lumped into a broader category of military rifles (which is more consistent, since I don't never broken down by types of other weapons, like swords).

Random chance is an excellent way to explain how Dickie Dare managed to spot a man dressed in bright colors, on a white horse, and the others missed him.  I also like the metafiction of the bandit describing how his own story is going...