Alley Oop uses pteranodons a lot. They are called pterodactyls in the strip, but the scale is off (pterodactyls were too small). Pteranodons are one of the few dinosaurs that can be domesticated and ridden in Alley Oop. Dropping rocks while flying overhead is also shown to be an effective tactic. Helmets are shown to protect wearers from attacks directly overhead, though (act as shields from overhead attacks?). 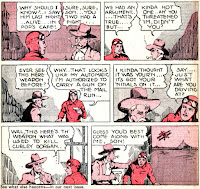 This is from Four Aces and the lesson here is that pilots flying mail planes were, apparently, authorized to carry a gun.

Oz is a place you could send Heroes to in Hideouts & Hoodlums.  Maybe they need to recover some of this Magic Powder of Life?  It's hard to define, in game mechanics terms, what this powder does. Besides functioning as a Raise Dead spell, it also grants sentience and intelligence.  This stuff would be worth a ton of experience points!

Should a pumpkinhead be a mobster type? Maybe statted the same as a bugbear?

This is a, so far, faithful adaptation of The Marvelous Land of Oz, second book in the Oz series. 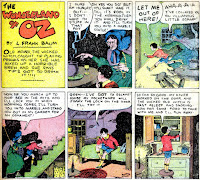 Mombi has a potion that will turn Tip into a marble statue. I should have a mobster type for witches, maybe with a random table of crazy potions or powders they might be carrying. 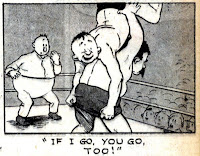 From a gag page called, appropriately enough, Hold Everything.