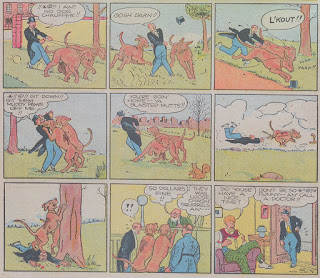 Ah, a pleasant walk in the park with two big dogs...all well and good until you start getting dragged for points of damage!  Yesterday's post brought up the subject of being pulled off your feet in combat, but today's Joe Palooka makes me wonder if there is a lower threshold for what should be able to pull you off your feet? In other words, does it need to be two dogs dragging Knobby, or could one dog have done it?

I'm thinking someone should have a chance to pull a target with up to 3 times his hit points off his feet. A small dog would have no chance of pulling a grown man off his feet, but a giant rat might. That same giant rat would likely not be able to pull a 2nd-level Hero off his feet.

This is from Off the Record. I thought it was really funny. 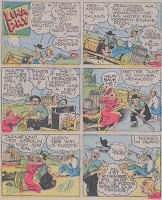 I never thought I would be featuring Lena Pry, and probably shouldn't here. I mean...if Hideouts & Hoodlums is to reach as broad an audience as possible, I shouldn't engage in the very negative stereotypes I point out on this very blog, right?  So if I was tempted to include a hillbilly mobster type that is permanently confused and shoots shotguns at random targets...I should just ignore that impulse, right? 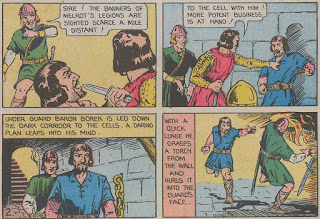 I include these panels from Gallant Knight because I want to pose the question -- should fire have any additional effects than regular damage? Weapon damage does not take into account any residual effects, like bleeding, so it seems wrong to take residual effects like being set on fire into account.  Plus you just don't see many instances of people burning to death in comic books.

You do, at least here, see fire having a stunning effect, similar to how weapons sometimes just seem to stun people. So maybe H&H needs a game mechanic for any type of damage having a chance of additionally stunning the victim for 1 turn. Maybe there should always be a save vs. science? 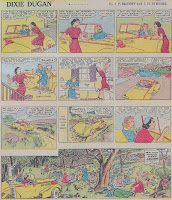 Twelve days ago, I used a Dixie Dugan strip to support my supposition that people were accustomed to walking everywhere in the 1930s. I failed to remember how far back America's love affair with the automobile goes and, while this page of Dixie Dugan is probably exaggerated, it does go far in refuting my supposition. The urban streets were definitely still full of cars in the 1930s (or at least they were on weekends!). 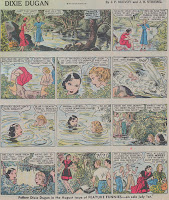 I have no reason to post this page of Dixie Dugan, though, except that it's hot.