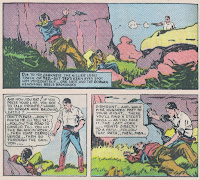 Ted Strong, indirectly, made me think of an interesting question today. What do you call hoodlums in a Western campaign? This page makes me think "henchmen" would be a good substitute for hoodlums, in a Western or any non-urban setting. 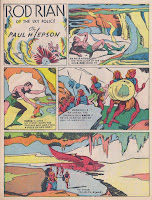 Rod Rian introduced us to the devil-like aliens, the Mephisians, last issue. This time we meet their enemies and they are, refreshingly, not made to look like angels. Instead, we have the Unicor who, interestingly enough, are distinguishable from the Mephistians by virtue of having just one horn instead of two and hair (reminding me of Star Trek's "Let This Be Your Last Battlefield").

Projectile planes look like spaceships, but they don't appear to be able to enter orbit. They would more properly treated like jets. 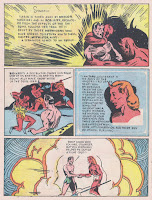 The destructor-flame gun is an interesting weapon -- it seems to shoot a pencil-thin beam and only erupts into flames when it hits its target. In this sense, it's more like a heat ray than a flame thrower. 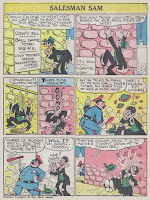 I would not normally turn to a humor strip like Salesman Sam for realism, but perhaps Sam makes a good case that not everyone should have a game mechanic available to them for climbing sheer walls. This will likely remain a Mysteryman skill, or a stunt that can be prepared. 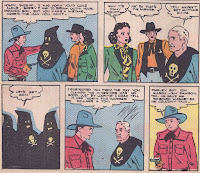 This cowboy is Tex Ritter, and I include these panels for three quick points. One, those costumes, like poison-KKK mash-ups, are pretty impressive-looking designs. Second, "cracker box" was apparently slang for a jail cell. Third, poisoned whiskey bottles might make a good trap for your Heroes, depending on how likely they are to drink out of random bottles found in hideouts.