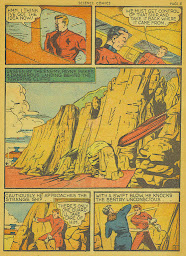 For this post, we're going to jump right into the middle of the Perisphere Payne story. All you've missed so far is that Payne and his men are helping to stop raids on the Moon. After successfully repulsing an attack, Payne flies around trying to figure out where the invaders came from -- you know, instead of just questioning prisoners or searching the wreckage of downed ships for clues. No, the twist here is that the attackers were coming from underground instead of in space.

That's just to catch you up. Here, we see how extremely maneuverable spaceships are while flying between mountains. We also see, almost as incredibly, the bad guys only leave a single guard at the entrance to their secret tunnel from which someone can foil their entire "invade from below" plan. 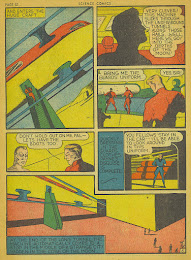 The "huge craft" seems to be more like a trolley car than a spaceship, and it's hard to see how it would launch off those rails and fly around.
If that seems confusing, panels 3-5 and are even more confusing Panels 3 and 5, it seems like Carson just walks in, is assumed to be an underling, is told to bring a fresh uniform, and just shrugs and puts on one. But panels 4 and 5 seem to be tell a different story, where Carson captures a guard and makes him take his uniform off (and his boots too!). Regardless, like almost all guard uniforms, this one fits the Hero exactly!
It is very strange to find a city at the core of the Moon, since at the center is a dense core of iron with a temperature of about 1600–1700 K (1,320-1,420 degrees Celsius). That city is going to need REALLY powerful air conditioning. 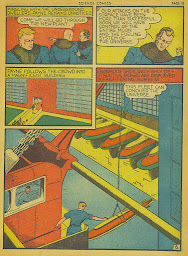 I would love to overhear that villain monologing longer and find out how the Moon controls "the fueling system of the universe." Seeing as how the Moon is close to nothing but Earth, that works out how...?
It's also worth pointing out, I think, how even in a future sci-fi setting, big things still have to be moved by cranes and chains. The amount of thought that went into technology with this future world-building is usually minimal. 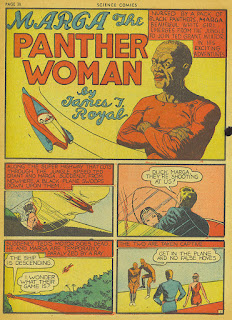 Marga is like Tarzan, only raised by black panthers instead of gorillas. This is the first comic book character to be named Ted Grant, to be followed by DC's Wildcat in two years.
Here's another wrinkle on the ray that freezes motors, this one freezes people too. 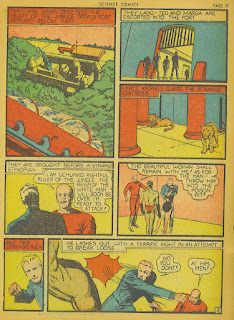 Check out the scale on that fortress. That is either a mistake, or that is one huge anti-aircraft gun. It's at least as tall as the towers! The airplane hangar looks small, but it's difficult to say how far away from the fortress it is.
Leopards are unusual guards. Unusual guards, of course, often make for better encounters.
Is the Ethiopian strange because he's an albino? I'm surprised they don't mention that. Maybe he's strange because Uchunko isn't a real Ethiopian name. The closest is probably Urgessa. 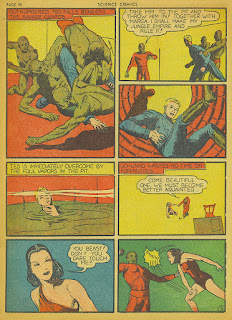 The curious wording of that first panel caption could mean that the guards are savages, or just savage fighters. If the first, I would stat them as natives. If the latter, I could maybe stat them as bloodthirsty hoodlums.
I wonder what the poisonous fumes in the poison pit are. Sulfur? Whatever it is, it isn't very fast-acting. 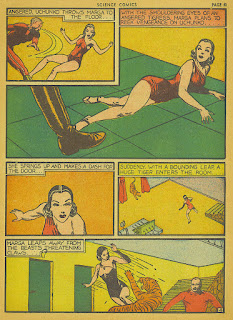 Someone spent more time on that cheesecake shot in panel 2 than any other panel in this feature.
That tigers and leopards roam freely through the fortress is interesting. There must be a lot of open doorways and not many closed doors in the place. 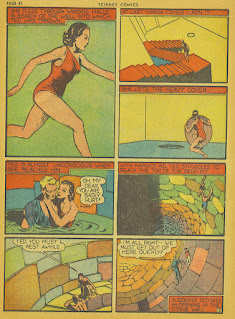 I don't know how "heavy" that heavy cover is; it looks only slightly larger than the average manhole cover and I doubt I would make anyone roll anything to lift it.
More curious is how exactly she's aiding Ted to reach the top of he pit. Is she pulling him up as she goes? That could require an expert skill check at climbing, or maybe even a stiffer penalty.
That Ted is "almost unconscious" suggests he's been slowly losing hit points to the poison instead of being in a save or die situation. 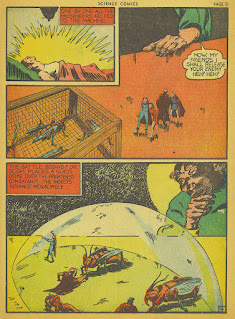 Now we're going to jump to the next feature, Dr. Doom! No, still not the Marvel Comics' Dr. Doom, and not the international spy Dr. Doom who really came first. This is middle Dr. Doom, the ugly old mad scientist guy who shrinks people down and puts them under glass with giant mosquitoes that look suspiciously more like hornets. The nice thing about shrinking heroes is that you can use the stats for giant animals for ordinary animals, and giant mosquitoes were statted as far back as Supplement I: National.
(Scans courtesy of Digital Comic Museum.)
Posted by Scott at 9:02 PM