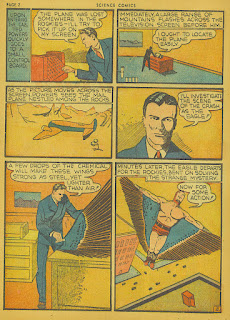 Now we come back around to Fox Comics and what was surely their weakest anthology, Science Comics. One look at the Eagle and his comical get-up that makes his antecedent, Black Condor, look positively conservative in comparison should tell you all you need to know about what I think about Science Comics. That said, we can always glean something useful from even the worst of comic stories.

Like on this page, we have a television able to view distant images without any camera in that location. It seems like a lot of heroes and villains have invented these, as impossible as they are (at least until we have Star Trek-level technology), and yet...what if there was a mysterious seller of these items, targeting specific recipients? A time traveler, perhaps? What starts out as just bad science could wind up being an intriguing plot hook! 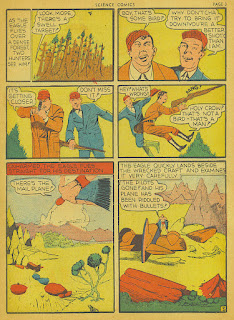 Don't forget to roll for wandering encounter checks, even if just traveling between points A and B. No need to get them to B too quickly (unless you really don't want that scenario to run more than one session). 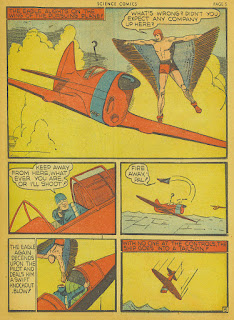 It shouldn't be hard to spot what the pilot does wrong here. Had he simply left his cockpit shut, the Eagle would have been powerless to do anything but stand on his wing. The pilot could have gone into a roll, to smack the Eagle with the wing. Or tried to slow down and turn so that the propellers come back and tear him apart. 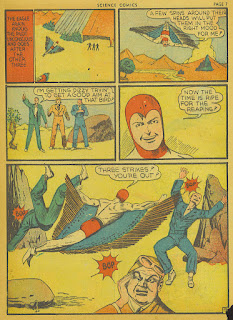 Sometimes a player is just going to do something really stupid, like dive-bomb the bad guys in clear daylight from a great distance. Then, as Editor of the game, it's up to you to decide -- do you let his hero suffer the consequences and have the mobsters be armed? Or do you let him off easy and say not one of them has a weapon? 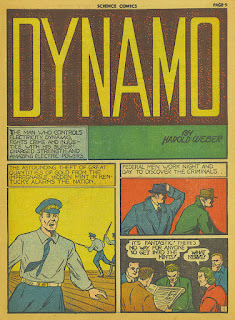 Nice bold font on that title!

The unnamed fort where the gold is kept is almost surely Fort Knox. 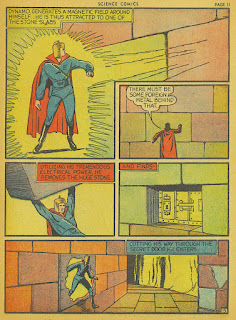 Now we go from a hero who doesn't wear enough clothing to one who wears too much.

This is also the most elaborate "flavor text" to go along with searching for secret doors I've ever seen. I like behind that giant block is just a little recessed space with an exposed lock. 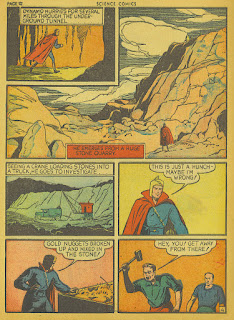 That's a really long tunnel; I believe the closest stone quarry to Fort Knox is 41 miles away (where Quarry Road is). This is why authors like to use fictitious sites in their stories, so guys like me can't look this stuff up and fact check them. 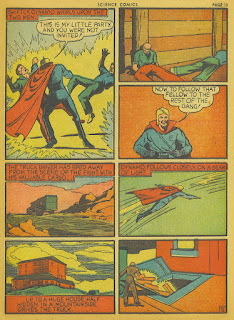 Traveling on a beam of light is some funky science, but something that is fast becoming a trope in the superhero genre (Steel Sterling rides electromagnetism as well through the air). The important thing is that your flavor text for explaining how your powers work doesn't have to make a lot of sense.

There seems to be a plot inconsistency between pages; in the last page we learned that the gold was being broken into nuggets to conceal in with the quarried stone, but on this page the gold is still in ingot form. 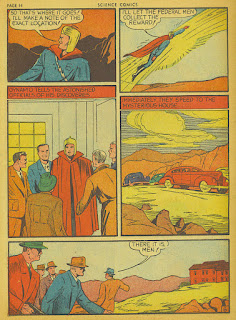 This strikes me as really weird, that a Hero would find out where the villains' hideout is, but then send the authorities to handle the villains instead. I could see, if the player was meta-gaming, and thought the hideout was going to be too tough for him alone to handle, that he would recruit some federal men to come with him. But to then not come with them...?