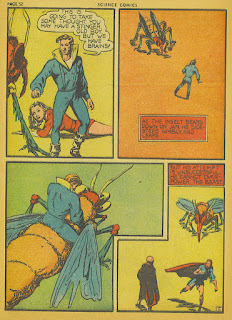 We return now to Dr. Doom, the evil mad scientist who isn't really out to conquer the future so much as just to put small groups of people into weird situations. Case in point, this battle in a cage against "mosquitoes" after being shrunken down to smaller-than-mosquito size. I had to go back two pages and double check to make sure that page really said mosquitoes -- it did! -- but it seems no one told the artist.

Perhaps of more use to us would be a discussion of how to handle breaking a mount, game mechanically, in Hideouts & Hoodlums. One could argue it would be a skill check. It could also be an encounter reaction roll for the animal. Since breaking in a mount shouldn't be easy, I would require both rolls. In terms of skills, I would treat making it rideable as a basic skill, but if you wanted to teach it a trick, an expert skill. 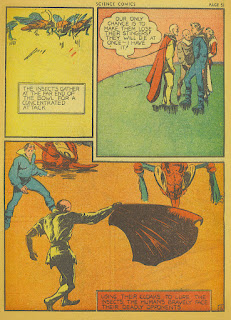 And now even the writer has forgotten what they are! Unless, of course, mosquitoes have mutated into more of a bee-like creature at some point in the future. The thought here in the last panel is that all animals, like the myth about bulls, get angry when they see red. Indeed, the solution on the next panel is to throw all their red clothes into a pile and the "mosquitoes" all kill themselves stinging the floor through the pile. Yeah... 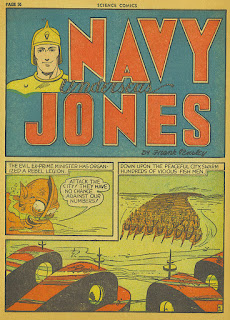 How many fish-men can be in an encounter? The answer is "lots." I'm not sure if that third panel is even countable, but fish-men are clearly very organized and militaristic (Lawful Evil, as they would be known in the AH&H Mobster Manual). 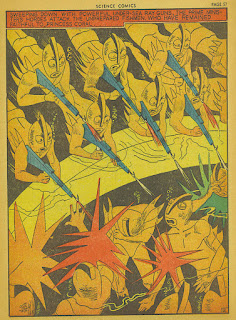 I don't have much to add here, except to say that despite how obviously the fish-men are all traced, the composition is really good. 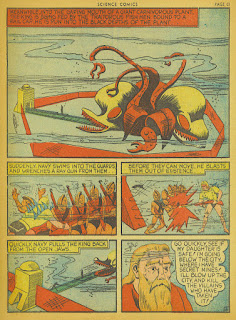 Navy Jones was already a strange feature, but it runs into overdrive here as Navy encounters a fiendish trap where people strapped onto railway cars are transported into the waiting maws of a gigantic carnivorous plant. Yes, that two-headed thing is supposed to be a plant! I don't know for sure how to stat that thing. It looks gigantic, but being a mostly hollow plant, probably doesn't weigh nearly as much as it looks like it would. Maybe 13 HD, normal 6-sided hit dice, would not be unreasonable.

Those rayguns use a really obtuse-angled ray, able to hit up to  5 targets at short range. I bet their maximum range is not very far, as diffuse as it must be. 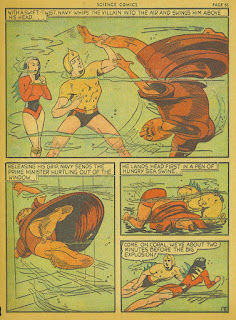 If you hurtle out a window, underwater, wouldn't you just float there?

I like sea swine, though. Those are so cute!