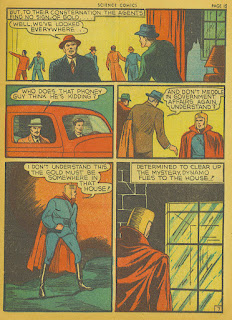 We're still on Dynamo's story and, if you remember where we left off, Dynamo had just palmed off the entire scenario onto the FBI -- and now they drop it back in his lap where it belonged. There are arguments in gaming circles from both sides on the fudging issue. Is it right for the referee/Dungeon Master/Editor to fudge dice rolls, even if it's just to nudge the story along? Normally I would urge an Editor to fudge rolls sparingly, but when you need people to fail search results just so your player will go back and try, I think the fudging is worth it. 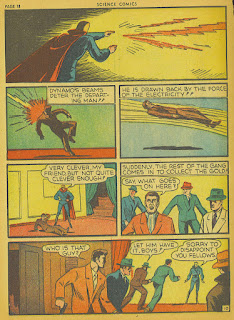 Here's a peculiar power. It looks like Dynamo has cast the magic-user spell version of Hold Person, but in addition, the victim is moved across the room as if under a Telekinesis spell. On one hand, the placement of the victim seems unimportant enough, in this instance, that it could just be flavor text. On the other hand, I could see a more powerful version of Hold Person that let's you choose where the victim is held at could be even more useful, like if you positioned the victim to block a doorway. 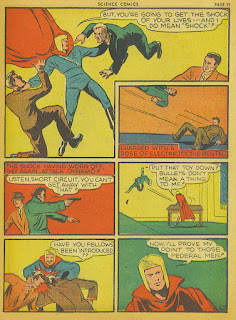 Speaking of more powerful versions of Magic-User spells...it seems like Dynamo is using the spell Shocking Grasp here, only he can use it more than once per spell.

Hoodlums almost never feel confident enough to make fun of the heroes in Golden Age comics, but here we have an unusual instance of a hoodlum making up a clever nickname for the hero. 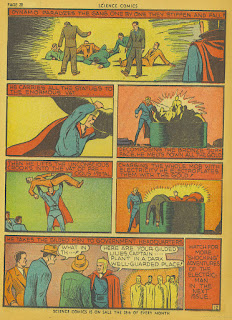 Wow, okay, way to rub their failure in the G-Men's faces, Dynamo! But...you do know that you likely just killed all those bad guys you're turning in, right? I mean, if being immersed in molten gold didn't burn them to death, they must have quickly suffocated... 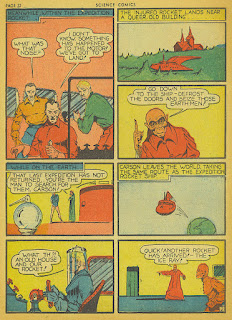 Now we're on Cosmic Carson. Here we have a twist on the "ray that freezes your motor" -- the ray that literally freezes your whole ship -- and I think we've seen this twist only once before (always in sci-fi stories).

We don't know how much time passes between panels 5 and 6, but it seems like Carson has just arrived at the planet and immediately spots the lost rocket. Unless he's locked onto a transponder signal or some such, there's no way it should be possible to visually inspect a planet in less than weeks.

Also curious is that Carson's rocket gets much closer to the planet before being detected than the first ship. Are the aliens relying on visual detection too? 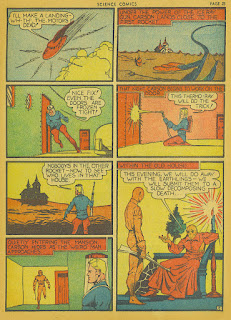 Thermo-rays look an awful lot like acetylene torches. In future settings, you can rename ordinary objects and make them seem futuristic.

It's interesting how they capture Carson, but just leave him trapped for hours, as if the aliens got too busy and didn't have time to take care of him. 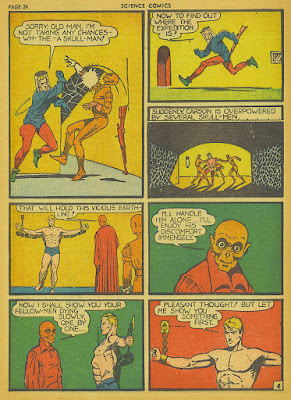 Late in the story, we're finally told that the aliens are skull-men. They don't seem to be native to this world, since we only ever see four of them. They must be pretty good in a fight, since it only takes three of them to capture Carson. I'd say they have at least 1+1 Hit Dice. 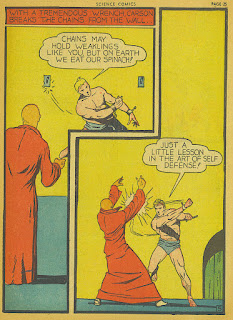 This is likely the earliest reference to Popeye in a comic book not to feature him. Popeye has been getting stronger by eating spinach since mid-1931. 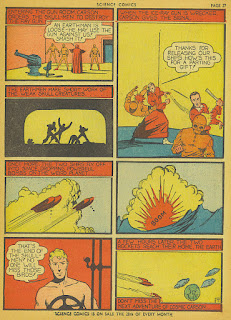 Clever strategy for convincing the bad guys to destroy their own weapons, but most Heroes simply capture the raygun and turn it against the enemy. Instead, Carson is content to fight with his fists, and the prisoners he rescued have to use clubs.

The reference to skull-men being weak doesn't jive with how they took down Carson earlier.

"No one will miss them, so it's okay that we killed them! Besides, they were weak!"

Hey, Carson, you're free now -- you can put a shirt back on!