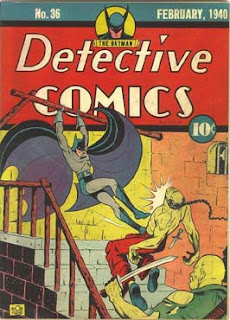 Back in time for the tail end of the Batman's first encounter with Hugo Strange! Having escaped Strange's deathtrap/S&M session, the two of them grapple. Remember that Strange is about 6' tall and physically imposing, so it's not an unequal match-up (if Strange is an ultra-mad scientist, then they even have equal Hit Dice!). Strange has an early advantage, establishing a choke hold, but the Batman reverses it; both are perfectly emulated in Hideouts & Hoodlums' grappling rules.

After defeating Strange, the Batman does something that most players don't do in any RPG -- after defeating the main bad guy, he still methodically searches the hideout. In this way he finds a prisoner (that he claims to have always known about, though this is the readers' first time hearing about it), and learns how Strange was inducing fog around the robberies -- with a stolen lightning gun! Now, why he used the lightning gun to make fog and not turn it into a weapon...

No mention is made of what happens to the lightning gun (which looks like a planetarium projector, by the way). It doesn't seem to make it into the Batman's trophy room, and certainly doesn't become part of its arsenal. The Editor of that game session, perhaps just not feeling generous, made it a mad science trophy with very limited charges/uses.

Next up is Bart Regan, Spy. When Jerry Siegel was still drawing this it was my favorite feature, but now....Bart is up against more spies, now from the fictional nation of Tortania. I haven't a clue what country "Tortania" is meant to represent; it could just be a truly generic foreign power. Bart's big clue as to who the spy is, is overhearing him curse in Tortanian, which might be the first time cursing is demonstrated as a series of symbols in a DC comic.

The hunchbacked spy gets the drop on Bart, from behind, but Bart is somehow able to spin around and shoot first. H&H's simple initiative system allows for a lot of leeway like this, though circumstances almost cry out for a common sense adjudication and hand-waving the dice rolls. Perhaps the spy missed on his surprise roll so badly that the Editor said he hadn't even managed to get his shot off yet.

The hunchbacked spy turns out to be a pretty nifty threat; he's wearing a vest lined with dynamite under his coat, making him the first suicide bomber in comicbook history. It's a challenging threat, normally, but this adventure takes place on a boat, so Bart simply pushes the man into the water in time (though, if Bart had lost initiative...). The spy also has a poison pill on him that is confiscated.

Bart administers truth serum to the spy to learn where his hideout is. The hideout appears to be empty, but a secret door opens like a shutter sliding down.

Steve Malone, District Attorney, is hunting down a mobster on the lam, and figures out who the disguised mobster is by the clue of the hairs in his comb. In the ensuing fight, Steve uses a table for a club and the mobster's vamp girlfriend uses this really big candle holder, so vamps are sometimes armed with clubs. Steve doesn't start out the encounter with a gun, but he lifts one off a mobster. In a rare instance, both gunman run out of bullets in the same firefight.

I normally like Speed Saunders, Ace Investigator more than this installment. Speed is on the trail of a jewel thief who calls himself The Spider and leaves toy spiders behind as a calling card. There's even a nice spin where The Spider doesn't break into homes, he convinces rich people to rent from him, unaware of the secret doors he's built into his properties. But the story has some serious flaws. One, The Spider tries a drive-by shooting against Speed, but from his own car licensed in his own name. Two, Speed slaps the man's wife around while The Spider isn't home, and then she still obediently obeys him. Now, there's a nice twist on that, where the wife turns out to be The Spider, dressed as a man, the whole time, and there never was a husband...but I'm not sure Speed knew that when he slapped her...

(Batman story read in The Batman Archives vol. 1; the rest read at readcomiconline)
Posted by Scott at 2:07 PM