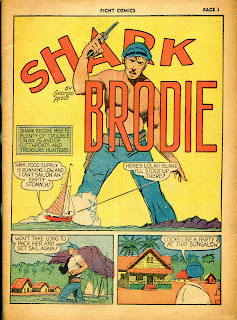 Ah, George Tuska...how much better I like his 1970s work. With Young George, you can almost see the Eisner influence there, but the figures are so stiff in almost every panel...

There is no Lolaii Island, but from the spelling it seems clearly a stand-in for a Hawaiian island. 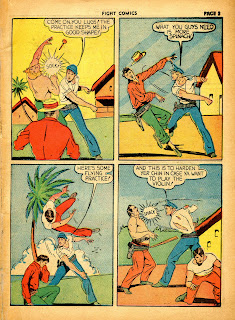 Popeye's love for spinach, clearly the reference here, goes all the way back to 1932. 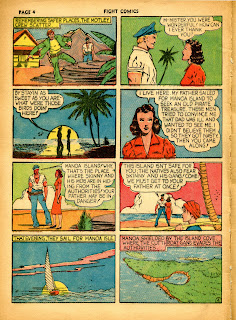 A rare use of "birds," sometimes used for crackpots and oddballs, but here sarcastically used for obviously bad people.

Manoa is not an island, but a valley on the island of Oahu, near Honolulu. Now, it would make more sense for this story to start near a major city like Honolulu, and move away from there to a more isolated island, but apparently these were lazy pirates.

Oahu does have coves, like the map does, which makes it even likelier to be the location. 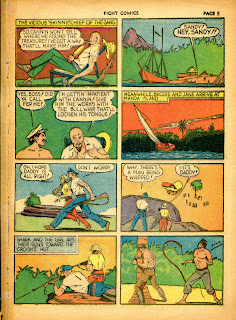 I'm a bit surprised that both Shark and the girl are so eager to shoot the whipper while Daddy is right on the other side of him. I mean, it almost makes sense for Shark because he has no personal stake in this, in case he misses and hits Daddy, but the daughter too? She must be really confident... 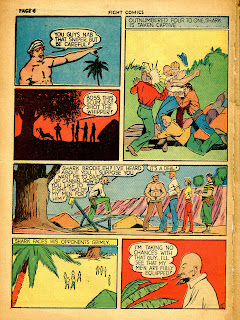 Since Shark would still be a 1st-level fighter (beat cop), being beaten by four-to-one odds seems, statistically, extremely likely. 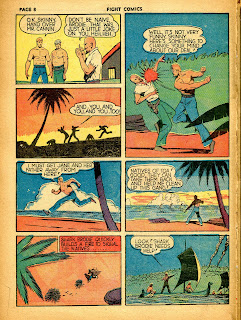 Now, Shark could have rushed Skinny at any time, except that he clearly missed his save vs. plot and had to fight his way through the underlings first.

Koa is the Hawaiian word for warrior. 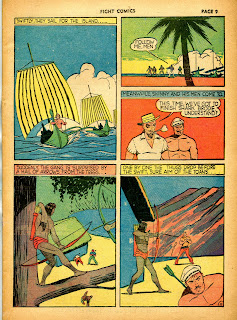 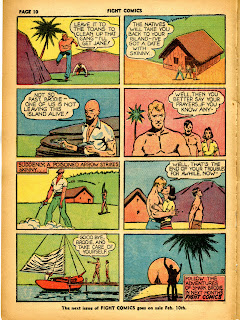 I can find no evidence that Hawaiian soldiers ever used poison. 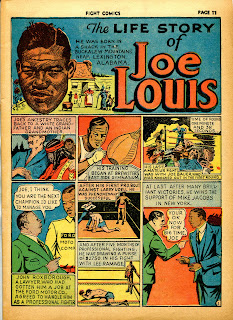 Shared for the prize purse after five months of professional fighting, which is good news for Heroes who want some side money between adventures.