Sky Wizard! I was pretty impressed with this guy when I read all his published stories to research his write-up in Supplement IV: Captains, Magicians, and Incredible Men. Will he hold up to a re-read?

In 2019, it takes approximately 24 hours to fly from Texas to China (depending on where in China you're going), which means the stratosphere plane is three times as fast as a modern commercial jet.

I appreciate the names in Sky Wizard -- Captain Dare is a good enough name to have his own feature, but he's just supporting cast here. And I like how the guy with the monocle isn't called "The Monocle" or "Baron Fritz" or something so obvious, but is called Hawk Armand, which you would never expect.

Being "Pathan" means that Kee-Shan is one of the Pashtun people who settled in the Punjab region of Pakistan. Kee-Shan seems an unlikely Pakistani name, but I love how he looks tailor made to be played by John Rhys-Davies in a Sky Wizard movie.

The paralyzer gun looks suspiciously like the toy raygun that is advertised for sale elsewhere in this comic book. The difference between the first setting, that paralyzes, and the second setting, that kills instantly, seems pretty grim. I hope Sky Wizard never sets his gun to the wrong setting by mistake!

Oh, Sky Wizard, the crazy things that come out of your mouth when you've been inhaling chemical fumes! By even the most generous estimates ants do not have 6,000 times the relative strength of a man. More perplexing is the notion of an "ant virus" -- what is that? An illness that only ants can get? A germ that makes you more ant-like? 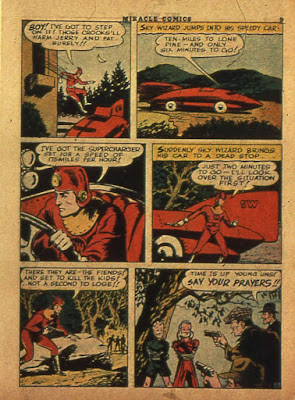 The land speed record at this time was

369.7 mph, a record set in August 1939. But that would be on a straight line -- Sky Wizard's supercharger can go 175 MPH on country roads with bends and corners, something I wouldn't want to try in even a modern day car.

Whether or not SW can make it to save the kids in time seems like a math puzzle worthy of Jim McClain's Solution Squad.  He has six minutes left to get there. His supercharger can go 175 MPH, which is 2.9 Miles Per Minute and some change. It's 10 miles to Lone Pine, so it should only take him approximately 3.4 minutes to get there. This is close to SW's dialogue in panel 4; perhaps he just rounds up to four minutes.

The trick then is to find the fiends once he reaches Lone Pine. Clearly they aren't standing in the middle of the main road through town, for he has to spend two minutes searching the woods outside of town (I'm assuming Lone Pine is a town and not an actual lone pine tree!), which is less than a full exploration turn in Hideouts & Hoodlums game mechanics.

This brings me to two questions that I can't fully answer. One, why does Hawk set such a difficult deadline for SW to save the children by? Two, how does SW find them in the woods so quickly? I actually have a guess at the second answer -- the Editor may have allowed SW to spot their car from the road, which told him that they were nearby.

Here we find out that the duration of the Q-beam is 1 hour (though a save vs. science to resist should still apply!).

Although rubberium is a goofy name, metal rubber has been a real thing since 2004; it is a conductive plastic polymer with metal ions and is used today in aerospace/defense, as well as other applications. 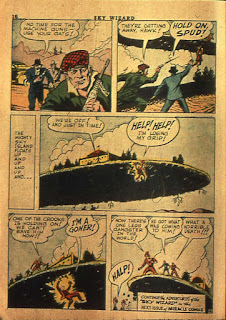 That same blimp, the Airlander 10, was a record-breaking size for a blimp -- 302' long, and filled with 1.3 million cubic feet of helium. This blimp is said to be acres in size, though it fair to say that dialogue was intended to come out of one of the kids' mouths, and was a gross exaggeration.

(Scans courtesy of Comic Book Plus.)
Posted by Scott at 2:02 PM