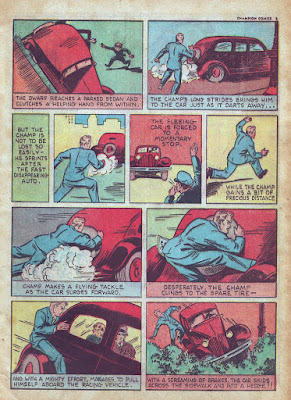 Time to revisit the only comic book published by Worth Publishing, before being absorbed by Harvey. And the first feature is still The Champ.

I'm already intrigued by this first panel, and the suggestion that the helping hand helps the "dwarf" win the foot race. I've just recently talked about offering assistance in combat, but what if you could assist any roll in the game, like a skill check in a chase scene?

The traffic cop is an obstacle in a vehicular chase, even though only one party in the chase is using a vehicle.

The flying tackle is an attack roll, but desperately clinging is a skill check and not a grappling attack because the spare tire can't attack Champ back.

By hitting the hedge, the driver introduces a chase obstacle; this means the chase rules are still in effect, even though Champ seems to have won the chase by catching up to the car. Because Champ is on foot vs. in a car, he is going to have to make his roll to overcome this obstacle at a severe penalty.

The theta-ray is a new name for a raygun so cliched that I should just assign a 1 in 4 chance for every mad scientist to have one.

I'm much more interested in whatever device the Yellow Spider is using to make untraceable phone calls and, presumedly, monitor conversations in the room using the same phone while it's not in use.

Here's an unusual entrance to a hideout -- a cylinder suspended on a single cable that is lowered from and hoisted back up to an airship (blimp?) concealed in the clouds. The sleeping gas in the cylinder makes it difficult for guests to get the drop on the guards up top.

The ominous curtain, and talking from right behind the image of the huge yellow spider, are good details for a hideout.

The lie-detector chair is a good invention for both bad guys and good guys to have.

The midget has been called both a dwarf and an imp up to this point, but to be fair he does turn out to be the main villain, so I guess it's more fair to have made fun of him.

The Champ beats 7-to-1 odds -- pretty good for a fighter who would only be 2nd-level so far.

I really like the detail of how the airship has a catwalk around it and sections of it can be made to drop away by pulling levers. Sounds really dangerous for Heroes without parachutes!

This is from the next feature, Yaqui Gold. The Aztec sculptures look suitably authentic and were probably taken from photo references, but what I'm really interested in is the feel of the discovery of an underground passage and slowly exploring it with a flashlight -- this is what Hideouts & Hoodlums is all about!

I've talked on here long ago about how splashing water doesn't revive people at zero hit points, game mechanics-wise. I might, however, be willing to hand wave that if the victim was only stunned and about to wake up anyway.

Gold is not really a good substance for chains; I would give Jose a +1 bonus to wreck his way out of them.

Here at the beginning of 1940, it's interesting that Paris is still a city for espionage and not for open warfare.

Here we see thugs working for spies (I'm guessing I would stat Nina as a spy and not as a palm reader).

(Scans courtesy of Digital Comic Museum.)
Posted by Scott at 8:11 AM