Despite having been a lab assistant until recently, Darrel Dane already has a reputation as a private eye. Becoming a private eye is a handy way to get plot hook characters to walk in on you...but shouldn't Darrel have been suspicious that the threatening note was in easily identifiable cursive?

Suave thieves should probably be statted as slick hoodlums.

I'm curious about this, and wonder how typical it would be for a museum to employ five or more security guards for the same shift. It's also worth noting that none of the security guards wear uniforms.

It may also be worth noting this is the first mention of 18th century Spanish painter Francisco Goya in a comic book.

I don't have anything game mechanics-related to say about this page; I just think the set-up of this scene is hilarious. Ugly piece! 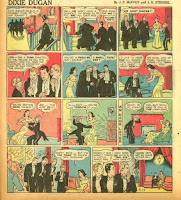 I'm including this page of Dixie Dugan for the unusual use of the word "punk," here used as an adjective and simply meaning "bad."

Sir Malcolm Campbell was real and worthy of being a supporting cast member in a Hideouts & Hoodlums campaign someday. You can read more about him here.

The Clock should be suspicious that the gangsters in the car had taken the time to ditch their identifying papers, but left a letter addressed to "The Reaper" in the car with them. Actually, maybe he is suspicious, because he takes the time to question Holt in the hospital about The Reaper, despite the fact that we learn on the next page that The Clock already knows exactly which local crime boss is known as The Reaper.

Lena Pry makes a surprise return to the blog. Here, Jane Arden's hillbilly counterpart encounters the IRS, and we learn that farm relief has a very old history in this country. I can almost envision a campaign of super-powered IRS agents, having to tour the country handing out checks... 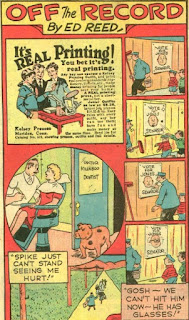 I haven't included an Off the Record in some time. I shared this one, not only because I thought these two gags were funny, but the woman in the dentist's chair with Spike seems like she would be a good character to run into in someone's game. Spike would always be around, growling and threatening the Heroes.

Should half-pints need to save vs. plot to attack anyone with glasses?

Reynolds of the Mounted offers a surprisingly practical explanation for how Reynolds wasn't fooled by the fake clue left for him, but then includes shakier material like a peace pipe that can double as a blowgun, and a hollow wooden pipe being strong enough to be used as a club without breaking.